In the 1987 classic movie, The Princess Bride, there's a sequence where one of the characters keeps exclaiming, "Inconceivable!" Eventually, Inigo Montoya turns to him and says, "You keep using that word. I do not think it means what you think it means."

I thought of this while reading some interesting investing analysis today. This "I don't think it means what you think it means" dynamic happens all the time in investing, in part because there's so much indecipherable jargon (much of it intentional to keep the little folk from ever believing they could understand such a complicated subject — better rely on the experts!). But it also happens because many factors in investing are legitimately linked, so it's easy to take two factors which independently may seem to impact stocks, for example, and then extrapolate that they must impact each other too.

One example of this concerns interest rates, recessions, and the stock market. It's common knowledge that a flattening yield curve, that is, when long-term and short-term interest rates move toward each other, is a signal that has historically signalled a heightening risk of economic recession. Technically, the danger signal comes when the yield curve actually inverts, that is, when short-term rates actually move above long-term rates. But you don't get to inversion without a flattening process first, so investors start paying close attention to any sign of the yield curve flattening.

Each time the yield curve has inverted over the pat 40 or so years (the blue line crossing downward through the black), a recession (shaded on the chart) has followed.

That's the first part. The second is that everyone knows recessions are bad for the stock market, right? Right.

So it only stands to reason that a flattening yield curve must be bad for stocks, right? Not so fast.

Isaac Presley of The Cordant Blog tackled this issue and came up with some surprising (at least to me) results.

His whole article is worth reading, but here's the main takeaway as it relates to the stock market:

What happens to forward returns on stocks when this spread is steep (which I’ve defined as greater than 1%), flat (0-1%), or inverted (less than 0%)? 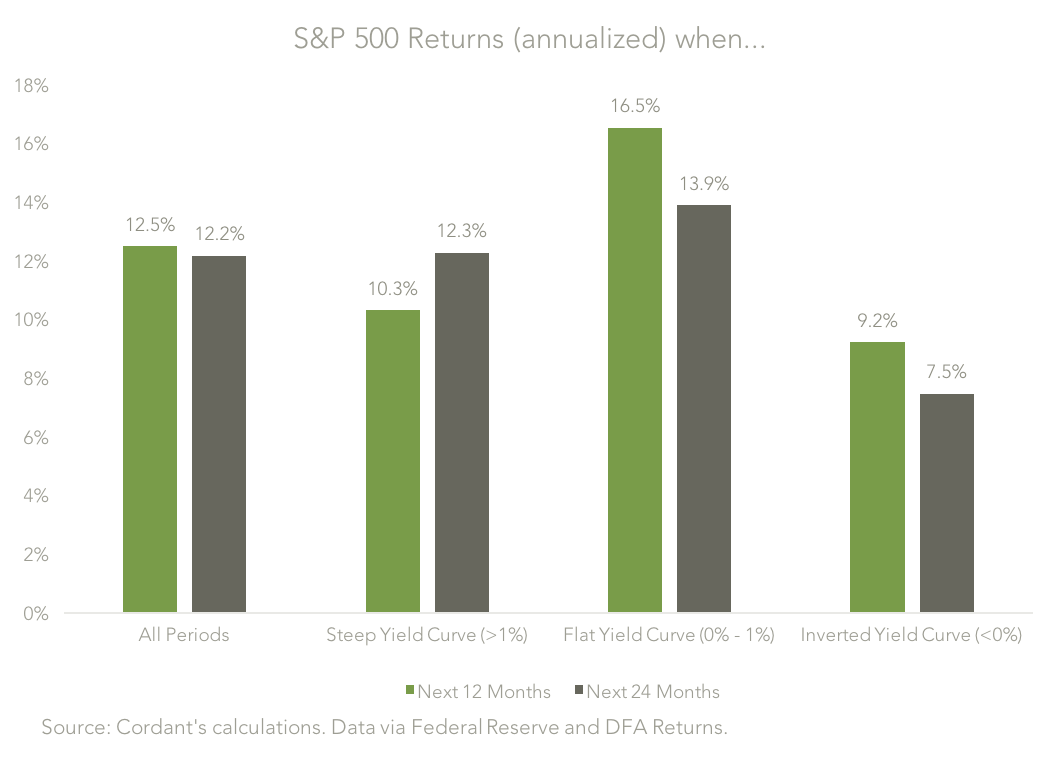 As you can see, the best periods for stocks have followed a starting 2-10 spread of between 0-1%—as it is currently. The worst periods, as we would expect given its ability to forecast recessions, follows an inverted yield curve.

In other words, the type of flattening-but-not-yet-flat yield curve that currently exists in the bond market has produced the best returns for stocks historically. (The results are not so good for long-term bonds, which he explains later in the post.)

This appears to be another data point that indicates that while stock market risk remains elevated, there's nothing to suggest a particularly imminent decline is at hand. In fact, there's a decent amount of evidence (like this) that suggests stock valuations could get even more extended, and this bull market plow forward even longer than it has (it's already the 2nd-longest bull on record).

As I wrote in the September issue, it's not a comfortable place to be for investors. But this is the hand we've been dealt, so we suggest continuing to follow — closely! — your strategy discipline, staying invested so as to profit from any further advance, while continuing to allocate in such a way that your portfolio has downside protection as well. For most SMI readers, that likely means exposure to our Dynamic Asset Allocation strategy, even if it lags while the market moves up. Remember, the value of a defense-first strategy like DAA can't be appropriately measured until the full market cycle has been completed.