Home > Articles >How to Virtually Eliminate the Risk of Capital Loss

How to Virtually Eliminate the Risk of Capital Loss

We often emphasize the importance of having a long-term view when it comes to executing your investment strategy. We would typically define that as having, at a minimum, a 10-year time frame in mind. Why 10 years? Because that's long enough for the annual ups and downs in the market to settle out and allow the upward bias of the market (due to the strength of the U.S. economy) to assert itself.

To illustrate this for you, we've researched the results of a monthly dollar-cost-averaging (DCA) program over each of the 10-year periods starting with 1950-1959 and moving through the decades up through the end of last year. We'll share those in a moment, but first a DCA primer for new readers.

Dollar-cost-averaging is a systematic "formula" strategy that can be quite useful because it requires that you make your buying and selling decisions based solely on mechanical guidelines. Here's all you do: (1) invest the same amount of money (2) at regular time intervals. The amount and frequency are up to you. You could invest $1,000 every three months. Or $100 every month. The important thing is to pick an amount you can stick with faithfully over the years.

Your constant dollar amounts "force" you to buy more shares when the price is low and fewer shares when the price is high. In effect, you are buying more at bargain prices and fewer at what might be considered high prices. Of course, only when you look back years from now will you know when prices really were bargains and when prices were too high.

The beauty of DCA is that it frees you from the worry of whether you're buying at the "wrong" time. It is critically important to ignore all market fluctuations when employing a dollar-cost-averaging strategy! Most investors who obtain poor returns in the market are victims of their own emotions. Only after prices have been rising sharply do they work up enough courage to buy fund shares. And about the only time they ever sell shares is when they become especially fearful after prices have plunged. The result is that they buy high and sell low, the very opposite of their ambition. You must exercise the discipline of maintaining your systematic investment program.

Now, to the research. The goal was to get an idea of the level of risk an investor is taking in a DCA strategy lasting 10 years. We assumed an investor deposited $100/month into an S&P 500 index fund at the beginning of each month. He did this starting in January of the first year and continued faithfully through December of the 10th year. (For example, January 1950 through December 1959 was the first 10-year period we tested. There were 55 of them in all, the last one being the 2004-2013 period.) Our disciplined investor did this through good economic times and bad, bull and bear markets, wars and other geopolitical crises.

Here's what we found. Of the 55 decade-long periods we tested, the average result was that the investor's account was worth $21,702 at the end of 10 years. Of this, $12,000 was the investor's own money ($100/month times 120 months). Thus, the average actual profit was $9,702. That represents an 11.4% annualized rate of return. Because this is an average, some 10-year periods were better and some were worse. Only in two, however, was there a loss:

In both of these cases, the years following (1975 and 2009) were boom years that launched new bull markets. Investors who stayed for year 11 were rewarded with returns of 25% and more.

Studying the results, two things stood out to us. First, over a 10-year period, it's very rare to lose money investing in a diversified portfolio such as the S&P 500. This was the case despite the many recurring difficulties we have endured since World War II. As Ron Blue points out in his book Storm Shelter:

In 1962, the specter of economic and political uncertainty had hovered in every corner of the world. Our amazement at seeing a shoe-pounding Nikita Khrushchev vow to "bury" us turned to horror as the Cuban missile crisis unfolded. At that point a nuclear holocaust seemed at least possible, if not imminent. And Vietnam lay around the corner.

In 1972, we had been saddled with Watergate and an oil crisis that threatened to throttle the world's economy. Who can forget the lines at the gas stations or the rationing of fuel oil that winter? Then, too, I remember being hit with wage and price controls for the first time since World War II. And for the first time in my memory, the prime rate hit ten percent. Economic security seemed an elusive, if not impossible, dream.

In 1982, interest and inflation rates had soared to all-time highs, investors faced crushing tax brackets, and the price of gold leapfrogged daily. Taking stock of the situation, most analysts warned of a devastating financial explosion within the next few years. And on and on and on. The point is that we will always face uncertainty....

If Ron had written his book recently, he could have added the fears surrounding the first Gulf War in 1990, the bursting bubble of the dot-com craze in 2000, and the historically sluggish recovery in 2010 that was accompanied by massive amounts of new government debt. All of these events gave investors pause.

Yet despite the fact that we must always live with economic uncertainty, a strategy of diversification combined with a long-term perspective has a history of getting investors through the tough times. 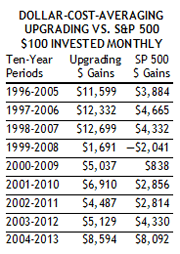 Second, we knew from experience that SMI's Upgrading strategy has produced results superior to those of the S&P 500. What would the results have been if Upgrading had been the vehicle for the DCA strategy? Of course, we haven't been around since 1950; we didn't launch Upgrading in anything like its present form until 1996. But that did give us nine 10-year periods we could examine, and you can see the results in the table nearby.

The Upgrading results are much better than those of the S&P 500, making us wonder if SMI had been around from 1965-1974, could we have shown a profit for that decade and eliminated the only other blemish on an otherwise perfectly profitable DCA strategy?

Also, remember that the table shows the results from a $100 monthly investment. That means if you were investing $200/month, you'd have twice the gains shown, $300/month, three times the gains shown, and so on. Kind of makes you want to increase your monthly contribution! But where would you get the money for that? Let's just say it puts those costly impulse buys at Amazon and Starbucks in a whole new light.

Of course, until it used to be that adding small dollar amounts regularly to an Upgrading portfolio was a challenge. Now, that is no longer an issue; those wishing to execute an Upgrading strategy in DCA fashion have a convenient vehicle.

More importantly, the lesson is clear: a consistent, disciplined DCA strategy is a great approach for the average investor who is willing to adopt the long view. And while there will be ups and downs along the way, there is very little risk to one's capital for those who will stay the course for a decade or more.