Home > Articles >How to Minimize the Cost of Early IRA Withdrawals

How to Minimize the Cost of Early IRA Withdrawals

It is generally not a good idea to take money out of an IRA before you retire. Doing so usually thwarts the purpose of an IRA: to accumulate enough money to help cover living expenses in retirement.

However, sometimes life takes unexpected turns that require tapping your retirement funds early. Those funds are available — for a price. Under many circumstances, Uncle Sam will take a hefty cut. But fortunately, there are ways to avoid the tax man, or at least minimize his take.

There are two types of IRAs — traditional and Roth. The key difference between the two is their tax treatment.

Money you contribute to a traditional IRA is usually tax deductible (you get a tax benefit right away). If you make $50,000 per year and contribute $5,000 to a traditional IRA, your taxable income is reduced to $45,000. When you take money out of the account in retirement, you pay ordinary income taxes on the entire withdrawal.

By contrast, money you contribute to a Roth IRA is not tax deductible. If you make $50,000 and contribute $5,000 to a Roth IRA, your taxable income is still $50,000. However, when you take money out of the account in retirement, 100% of the withdrawal is tax-free.

With both types of IRAs, you can take penalty-free withdrawals beginning at age 59½. The different tax treatments have important implications when taking money out of such accounts prior to age 59½.

When you need the money early

In contrast, with a Roth you can withdraw money you’ve contributed at any time for any reason without facing income taxes or penalties. After all, you’ve already paid taxes on that money. However, early access to your earnings will cost you taxes and a 10% penalty.

Exceptions to the rule

With a traditional IRA, you can avoid the 10% penalty (paying only the taxes) on any withdrawals (of contributions and earnings) taken prior to age 59½ if that money is used for certain purposes or under certain circumstances. Those same exceptions also apply to the early withdrawal of Roth IRA earnings, as long as your Roth account has been open for at least five years.

The list of exceptions includes using the money to pay for: unreimbursed medical expenses that exceed 10% of your adjusted gross income, medical insurance premiums while (or shortly after) being unemployed, qualified higher education expenses (for you, a spouse, child or grandchild), $10,000-worth ($20,000 if you’re married) of first-time home buyer expenses (for you, a child, grandchild, or parent), or for any purpose if you are a military reservist and were called to active duty.

Other, less appealing, ways to gain early access to IRA money include death and disability. When you die, your beneficiaries will not owe a penalty to access the funds, even if they are younger than 59½. If you become totally and permanently disabled, you will also not owe a penalty on any early withdrawals from a traditional IRA or the earnings on a Roth.

Another way to tap IRA money early is by setting up a “series of substantially equal periodic payments” (SOSEPPs). The key to these payments is that they are (1) taken at least annually and (2) must continue for at least five years, or until you turn 59½ if that period is longer. So beware: if you start taking SOSEPP payments several years prior to age 59½, the payments are likely to significantly drain your IRA by the time you hit “normal” retirement age. 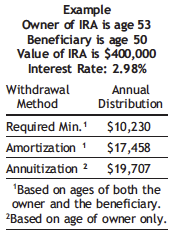 There are three methods that can be used to determine the amount of the SOSEPP payments. This gives you some flexibility in choosing how much to take. The table illustrates how each method results in a significantly different first-year distribution amount.

Which method should you use? It depends on how much money you need. Figure out your need first, then run the numbers using each method to see which one gets you closest to your objective. (This Bankrate calculator will give you a general idea of how much you can withdraw under the different methods, and you can probably determine the precise RMD method amount on your own. However, the IRS recommends getting professional assistance from a financial planner or CPA experienced in 72t distributions to precisely determine the amounts to take under the other two methods.)

Choose wisely, though, because you have very little flexibility to make changes once the SOSEPPs begin. In fact, only those choosing the amortization or annuitization method can make any changes at all — and then the only flexibility is to make a one-time switch to the RMD method.

The good news is that SOSEPPs can be set up on a single IRA account, while excluding other IRAs you might have. Even if you only have one IRA, it potentially can be split prior to setting up these payments, so as to fine-tune the amount of the payments. Returning to our earlier example, if only $5,000 of annual income was needed, the person could split the $400,000 IRA into two separate IRAs, one with a starting balance that would provide exactly the $5,000 payment required (using their preferred method). Worst case, if additional income is needed later, a separate SOSEPP could be created on the other IRA account.

It’s also worth noting that employees who “separate from service” from an employer after age 55 are eligible to withdraw directly from a qualified retirement plan (like a 401k) without incurring the usual early-withdrawal penalty. However, that exception is lost if the qualified plan is rolled into an IRA. So if access to retirement account money is going to be needed prior to turning 59½, the account probably should not be rolled into an IRA.

Whether to start taking early payments from an IRA is a very important decision. With multiple options available, it is usually wise to discuss your options with a CPA or financial advisor. Remember, it’s generally best to not tap your IRA at all before retirement. But if you have to, using one of the approaches just described can be a helpful way to avoid penalties and minimize taxes.