How SMI’s “Relative-Risk” Scores Alert You to Potential Losses

SMI's standard advice when selecting funds from the Recommended Funds page is to choose the highest-ranked fund available to you at your brokerage irrespective of the fund's "relative-risk" score. We approach it this way because we've seen how our Upgrading system does a good job of balancing risk and reward over the long-term, producing superior returns for those willing to ride out the short-term ups and downs. That's true, in part, because Upgrading moves us into more volatile funds when risk-taking is being rewarded by rising stock prices, and steers us to more conservative funds when it's not.

That's a beautiful theory that has proven itself over time, but it's more of a "long-term average" situation, as opposed to an "almost-always works" proposition. When the market shifts from rewarding risk to punishing it, things can get a little rough. We've recently been going through a mild stretch like that. Small-company stocks in particular have seen multiple significant swings this year—up big in February and June, down big in March-April and again in July. During those big up moves, aggressive funds were rewarded with strong returns and Upgrading's results soared. But when the market turned down, aggressive funds were punished.

While unpleasant, this certainly isn't the first time a trend has reversed and Upgrading has had to endure some short-term pain. So we don't feel any need to "change things" (other than following the normal Upgrading process). But the recent July decline does present an especially opportune time to review the lone measure of risk we include in our mutual-fund data each month.

First, a little background. One indication of risk that Wall Street pros keep track of is a fund's volatility. As the market moves up and down through the course of a year, some funds tend to respond with wide price swings while others are more subdued in their reactions. Technicians have a way to measure this—they call it "standard deviation." The higher the standard deviation, the higher the perceived risk associated with holding that investment over the short-term.

Standard deviation is useful because it allows us to compare the potential risk of different investments using the same yardstick. In SMI, we do this with "relative risk." A risk score of 1.0 means the fund has the same level of risk (with respect to volatility) as the stocks in the S&P 500 index.

While SMI's "choose the highest-ranked fund" approach provides an easy shortcut to selecting funds without pouring over details such as relative risk, those details can offer insights into the various fund choices available. With this in mind, let's look at how relative risk could have been used to predict the behavior of our recommended funds in the recent July market decline. 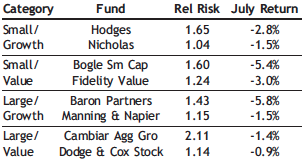 While relative risk is designed so that it can be interpreted as simple math (i.e., a 1.15 relative-risk score means that fund has been roughly 15% more volatile than the market), it's worth pointing out that the real-life results aren't so tidy. While these relationships held as we would have anticipated within each risk category, the same wasn't always true when comparing funds of different categories. Other factors can temporarily overshadow relative risk, particularly if one part of the market is doing exceptionally well or poorly. Still, it was clearly a guide that could have been used to limit the downside risk in a portfolio.

If you are harboring concerns about the market while in the process of selecting a new fund, relative risk can often be a helpful guide to a less-volatile path. For example, the two small-growth options in the table are separated by a vast difference of 0.61—meaning we would expect Hodges to be roughly 61% more volatile than Nicholas. Sure enough, Hodges' loss was substantially larger in July.

At SMI, we use relative risk primarily as a fine-tuning element when ranking the recommended funds in each category each month. While we are primarily guided by the momentum rankings, we'll show preference to funds with lower relative-risk scores if they are comparable based on momentum. There's no reason to take more risk than necessary.