Home > Articles >How Should the Elections Impact Your Portfolio?

How Should the Elections Impact Your Portfolio?

Consider the following Gallup poll from 2017 showing the economic confidence by party: 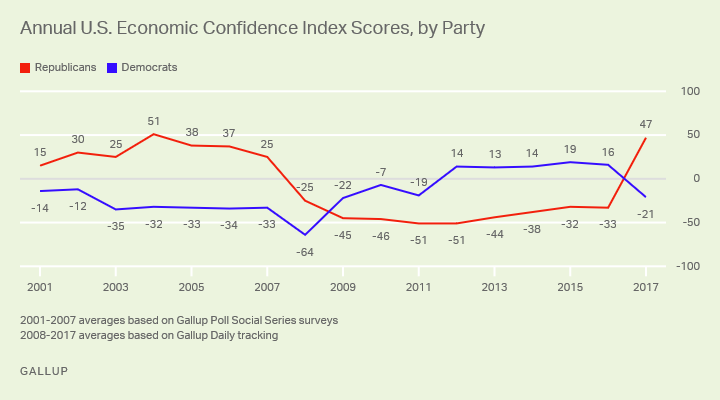 Half the country is feeling some degree of distress over the recent election results today.

Today's message is a simple one: Don't let that distress carry over to your investing decisions.

A quick historical reminder: the last time the government went from "red to blue" was 2009. Many conservatives were terrified of what an Obama Presidency would bring, and as if that wasn't bad enough, the Democrats also swept into Congress with a fillibuster-proof 60-seat Senate majority!

This is how the stock market responded over the next four years: 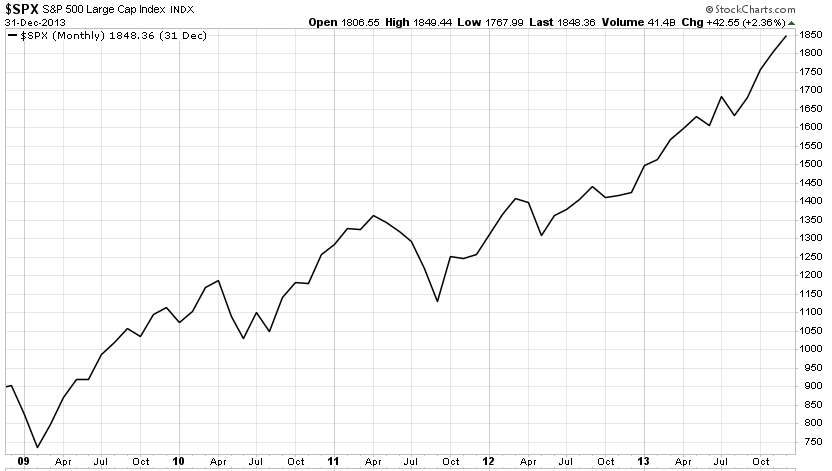 Yes, elections matter. Conservatives have reason to be upset and feel nervous about the implications of this election for the future in a number of areas. (I share many of those concerns, before anyone is tempted to use the comments section below to inform me of all the bad things in store.)

The impact on the investment markets though? At least in the short term, I'd argue this is one area you can leave off your worry list.

Big picture, all evidence points to the Democrats expanding the fiscal spending that has already been in motion over the past year. President-elect Biden has called the just-passed additional stimulus a "down payment" while his pick for the new Treasury Secretary, Janet Yellen (who continued the Quantitative Easing policies as Fed Vice-Chairwoman from 2010-2014 and Chairwoman from 2014-2018), is on record as saying the economy requires urgent action.

Eventually, we may well have to sort through the implications of even more borrowing, spending, debt, and potentially inflation. In the near-term though, that combination — along with the prospect of a re-opening economy — is only expanding the supply of fuel that has been pushing stocks, commodities, and other financial assets markedly higher over the past two months. (Bonds are a different story, as yields are already rising in response to these dynamics, which is bad for bond prices.)

Keep calm and carry on

I'm not suggesting this is great news for the country. Ultimately, more intervention by the government in the economy tends to not be a good thing (see the 1970s). And if we do see higher inflation in the years to come, history tells us that asset owners (i.e, likely you, if you're reading this) will figure out ways to manage that problem (for example, by adding commodities to our portfolios, as SMI did at the end of 2020). The real burden is born by those without the knowledge and/or assets to offset its damaging impact.

But today, the point I want to leave with anyone who is disappointed (or angry, or whatever emotion) is simply this: don't compound your present political disappointment by taking actions likely to result in future financial disappointment. Because while there is no shortage of risks in today's wildly valued markets, there is also a compelling argument to make that the next few months (at least) are likely to be a continuation of the market surge that began November 9, the Monday after Election Day, when the first breakthrough vaccine news was announced.

Super-loose monetary policy (with the Fed continuing to buy $120 billion of assets every month), coupled with expanding fiscal support from a new president/Congress that is eager to hit the ground spending running, at a time when the markets are eagerly anticipating a spring/summer of a couped-up world finally being unleashed to spend again...just as the economy and market are hitting the easiest year-over-year comparables ever as a result of 2020's second-quarter global lockdown? That's a lot of positive momentum behind asset prices continuing to surge higher.

Hopefully, you're operating from a personalized long-term plan that is an expression of you thinking inside-out. If so, stick with that plan. History suggests you'll be glad you did.