Home > Articles >How Much Is That Mutual Fund in the Window?

How Much Is That Mutual Fund in the Window?

At first glance, the cost of investing in a mutual fund seems straightforward. The net asset value (NAV) is the price of each share. For example, the NAV of the Neuberger Berman Focus fund (NBSSX) is currently $25.45. That's what one share costs — or is it?

A look at the fund's prospectus reveals an "expense ratio" of 0.98%. That indicates the total amount a shareholder will pay annually to help cover the fund's operating and marketing expenses. For every $1,000 invested in the fund, $9.80 will go toward these expenses on an annualized basis.

All of the operating and marketing expenses are included in a fund's expense ratio. But these operating and marketing expenses aren't paid all at once. Rather, in a manner invisible to the shareholder, a small portion is subtracted daily from the fund's net asset value. The NAV a fund reports each day has already had that day's share of the annual costs deducted. (SMI's performance momentum scores, as a result, already account for the impact of each fund's varying levels of expenses.) 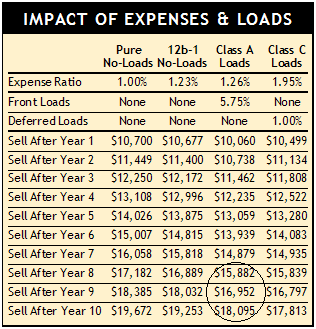 The chart at right shows the impact of these fees on a $10,000 mutual fund investment that would have gained 8% each year if no expenses were taken out.

Note that fund returns are never reported this way — all published returns are always reported after expenses have already been deducted. This makes it easy for investors to simply compare the stated returns for one fund against any other fund without having to make any further adjustments for expenses. But we wanted to illustrate the impact of all the various types of fees, so we're starting this example from this before-expenses vantage point.

The first column shows a fund that charges, as all funds do, a fee for its operating expenses. If there were no fees whatsoever, a $10,000 investment that earns 8% would be worth $10,800 after one year. However, since the fund charged 1.00% to cover its operating expenses, the amount grew to $10,700 instead. (Just to be perfectly clear, this fund's published return would be 7%, not 8%.)

Many mutual funds have multiple share classes available. These differing classes of the same fund are invested the same way, but are either sold differently (through a salesperson or not), or are designed for different groups of investors (individual investors vs. institutional investors). Each class may require a different minimum investment amount and will likely have varying expense ratios.

In addition to load funds, which typically come in at least A- and C-shares, many no-load fund companies also offer multiple classes of their funds, usually charging lower expenses for those with larger sums to invest.

For example, Vanguard offers some of its funds in both "Investor" and "Admiral" share classes. The Vanguard 500 Index Fund (VFINX) Investor shares charge an expense ratio of .17% and require a minimum investment of $3,000. The Admiral shares of the same fund have a lower expense ratio of .05%, but require a minimum investment of $10,000. For institutional investors, Vanguard offers some funds with even lower expense ratios, but the minimum account balance requirements are much higher. Fidelity offers similar distinctions on some of its funds (typically index funds), labeling them "Investor," "Advantage," and "Institutional" share classes. Schwab offers only retail vs. institutional shares.

Clearly, understanding the true costs of buying and owning a mutual fund requires looking beyond its NAV. While it's smart to steer clear of the most obvious fees, such as front-end loads, it's also important to make fund performance a higher priority than fee avoidance.

06/01/12 | Comments
Fund Facts: Mutual Funds and Their Many Advantages to Investors
By Austin Pryor