How Dollar Cost Averaging Uses Bear Markets to Your Advantage

Last month, we discussed an investing concept called dollar-cost-averaging. DCA involves investing a pre-determined amount of money at regular time intervals. A common example of this would be contributing $100 (or any other set amount) to a 401(k) plan every pay period. Among the chief advantages of DCA is the fact that it frees an investor from having to decide when and how much to invest. “Is now a good time to invest?” becomes an irrelevant issue once the DCA schedule is established.

This month, we’re going to look at how DCA works to your advantage during bear markets and other market downturns. First though, we’ll address a primary objection raised by DCA critics by distinguishing between two different types of investors.

When deciding whether to invest a lump sum immediately versus investing it more slowly using DCA, you should consider two aspects of the decision. From a purely numbers perspective, the “anti-DCA” crowd is correct in pointing out that investing as much as you can, as early as you can, usually produces the best financial result. That’s because the market has historically risen more often than it has fallen. So if you have money available to invest today, you normally would come out ahead by investing it all immediately rather than spacing out your investments using DCA.

However, the other aspect of this decision is the emotional/risk-management side. It’s one thing to know that the numbers say you’re better off investing your whole lump-sum retirement payout right away. It’s quite another to pull the trigger and do it, knowing that a market decline could hit and ravage that nest egg. In these cases, a “minor” version of DCA that spreads that initial investment into three or four more manageable pieces can help you get over the emotional hurdle of putting that money at risk in the market.

While the lump-sum investor may indeed see better overall returns by investing as much as possible, as soon as possible, DCA can provide an unexpected boost to the returns of those making regular contributions over time.

It’s an unfortunate fact that most people find it easy to follow through on their investing plans when the market is rising, but struggle when the market is falling. DCA helps address this issue in two ways. First, DCA contributions can typically be automated. Often this is done by payroll deduction that goes directly into an employer-based plan such as a 401(k). If you don’t have access to such a plan, you can normally automate deposits into an IRA or other account. Automating regular contributions is a huge boost to investing faithfulness, as it puts inertia on your side. You have to stop yourself from investing during market downturns, rather than having to make the decision to invest.

But DCA does more than provide behavioral support during market downturns, it uses them to your advantage. It does this by stretching your purchase dollars further as stock prices decline. If you invest $100 every month, you’ll get more shares from each purchase if the fund you’re buying falls in price from $50 to $40. Over time, those additional shares purchased when shares were “on sale” can boost your portfolio’s rate of return substantially above that of the vehicle you’re investing in. 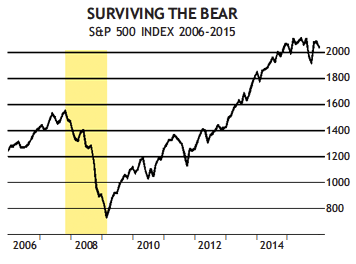 During those 10 years, the S&P 500 fund gained +7.2% annualized. Yet our DCA investor’s returns were significantly higher: +10.1% annualized. How can this be?

A review of the performance of each specific monthly investment reveals the answer. As the chart above shows, the market peaked in October 2007 and declined for the next 16 months. During this time, the economic news was consistently negative, and many investors were understandably hesitant to continue their monthly investing program. However, as the table on the right shows, those who failed to invest during this period lost out on above-average long-term returns.

The monthly investments made at those higher prices in October 2007, while emotionally easy to make as the market was making new highs, wound up earning relatively low returns over the rest of the period. In contrast, the investments made in the latter months of 2008 into 2009 — although emotionally difficult to make because the market had fallen dramatically and shares were down 40% and more from the highs — earned fabulous returns through the rest of the period, precisely because their purchase prices were so low. An investor who continued to make regular deposits throughout the bear market and subsequent recovery period outperformed the S&P 500 by a significant margin. DCA used the bear market to boost the overall rate of return.

The obvious take-away is simply this: don’t stop making your regular contributions when the market declines! Those are the very purchases, made at reduced prices, that will power your long-term returns higher. We hope seeing this in black and white will help you side-step the common investing trap of suspending your contributions during bear markets and corrections.