Here’s Exactly What the Market Will Do Post-Election

What will the market do once this election is over? I can tell you — with 100% accuracy: The market will... go up and down, or maybe down and up. And after that, there'll be up days and down days — probably through the end of the year, and next year, and the next decade, and beyond.

There — now you know!

I'm not trying to be flippant. Elections are crucial, and election outcomes matter — probably in more ways than we know. But, when it comes to the stock market, the degree to which Republicans or Democrats control the levers of governmental power is only one factor (albeit a large one) among many others that influence the markets and the economy.

If history is any guide, the market — like ol' man river — will just keep rolling along, no matter who is in power.

A few days ago, I found this table that shows the performance of the Dow Jones Industrial Average over the past 120 years (1900-2019), along with the names of the presidents who served during those years (Republicans are in red, Democrats in blue). 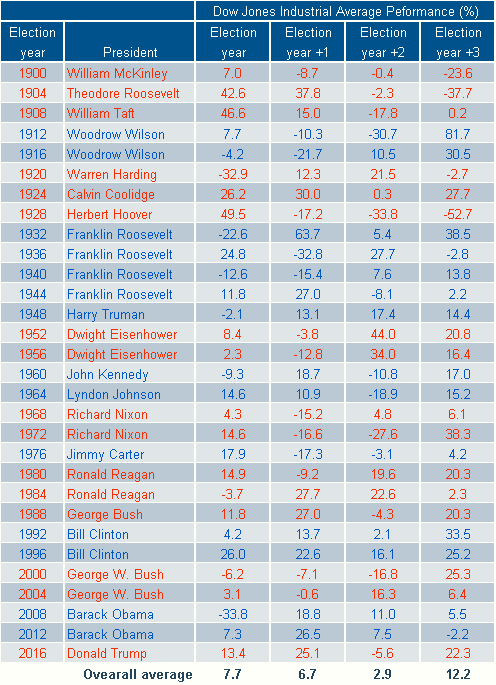 Actually, the Federal Reserve probably has more influence over market performance than any president does, certainly these days.

Regardless of the election outcome, the market will go up and down, up and down. There will be good years and bad. If past patterns continue to hold, the market's good years will yield greater returns than the bad ones will take away.

Maybe I'll stay up to watch the returns tomorrow night because elections are important. They have consequences.

But I sure won’t lose any sleep over ol' man market. I know he'll just keep rolling along.