Having Time on Your Side Puts You in Control of Risk 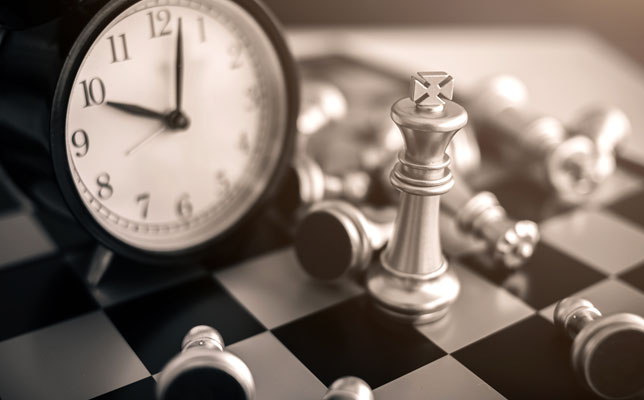 Despite significant bear markets in 2000-2002 and 2008, the stock market has returned, on average, about 11% per year over the past 92 years. That’s for a portfolio that is one-half large company stocks and one-half small company stocks (using performance data that goes all the way back to 1926 as published by Ibbotson Associates — an industry leader in compiling market statistics).

This 11% average assumes all dividends were reinvested and ignores the unfortunate fact that in real life Uncle Sam steps in and confiscates a hefty portion of your gains. (If an 11% average is a bit higher than you’ve heard in the past, it’s because small-company stocks have averaged 1.8% per year more than the large-company’s 10.0% annual average.)

Of course, knowing the market has averaged gains of 11% annually since 1926 doesn’t tell you what the return will be this year. Such an average obscures some wild rides along the way (such as periods in the 1930s when 12-month losses were as horrifying as -69% and gains were as breathtaking as +240%). In fact, only about 4% of the time have stocks actually returned 11% (give or take 1%) in a 12-month period.

What the average does tell you, however, is that time is on the side of the long-term investor. The longer you are willing to keep your money in the market, the greater your likelihood of success. According to the Ibboston data, if you owned stocks during any random 12-month period from the past 92 years, you had a 75% chance of making money. How much money?

(Note: The figures in the table are based on "rolling periods." After looking at the results from holding periods that began January 1, we then “rolled” to the next month to look at the results if the holding period had begun on February 1. And so on through the year. This gives a better understanding of the extremes one might expect.) 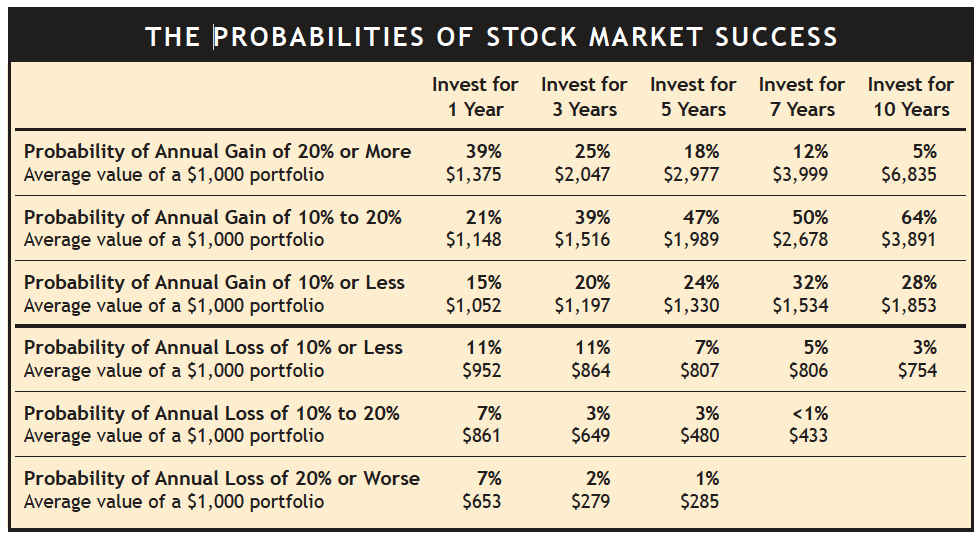 Notice that while stocks lost money in 25% of the one-year periods, only 11% of the five-year holding periods saw losses, and just 3% of the 10-year periods did. Clearly, the longer you are able to leave your money invested in stocks, the better your chances of ending up with a gain. The table shows that as the holding period increases, the very large gains and losses gradually disappear as the market moves closer to its long-term historical average.

More importantly, by the time you cross the five-year holding period and move out toward a 10-year period, any losses you experience are likely to be minor. While losses over 10-year holding periods have happened before, they’ve been rare — only 3% of the time. This is why SMI has long advised readers to invest in stocks only if they have at least a five-year time horizon, and preferably 10 years or more.

How can you apply this? By aligning your investment expectations accordingly. Begin judging your investment progress in terms of the market’s long-term average annual return (11%) and how much time remains before you will need to start selling your holdings. It may be that, on occasion, your stock portfolio will show far greater growth than 11% annually (as it did in 2017). Don’t expect this to continue indefinitely. Recognize it for what it is — one of those above-average results. Your additional profits will provide you with a cushion in case the market is not as kind another year.

On the other hand, if you finish a year with a loss (as happened last year), don’t despair. You would temporarily be “behind schedule” with respect to the 11% average, but as long as you still have many years remaining in your expected holding period, the odds are in your favor. Hang in there and wait for the stock market to do what it has always done in the past — reward the patient investor.

Some investors are nervous about continuing to invest today given that the end of this long bull market may be approaching. This is an appropriate concern, especially if you’ll need to withdraw money from your stock portfolio during the next 5-10 years. But if your time horizon is at least 10 years, take comfort from the experience of investors faced with the same dilemma at the last bull market peak in October 2007. An investment made then would have earned +7.9% annualized over the following decade, despite falling roughly -50% over the first year and a half! That’s a lower return than the market’s long-term average, but a fairly remarkable figure considering the rough start. (If you don’t have at least a 10-year time horizon, it’s imperative to prioritize risk management over maximizing return.)

That example illustrates why we believe most long-term investor portfolios should contain significant stock allocations. But it also illustrates why investors should take on the higher risks of owning stocks only if they need the higher long-term returns they offer. Because stocks can be so volatile over the short-term, you should invest at the lowest level of stock exposure consistent with achieving your growth and income goals.