One reason historical examples are so helpful is that many of us suffer from a lack of imagination.

After watching the stock market advance with only minor interruptions for a dozen years, led by a group of "Big Tech" stocks so dominant that "FAANG" has become part of the common investing vernacular, it's hard for most investors to imagine those stocks unraveling to a significant enough degree that they could pull the broader market down.

But this would not be new — we've seen it happen before.

SMI readers are likely sick of me drawing comparisons to the late-90s tech bubble and subsequent 2000-2002 bear market, but we're going there again today. Because in light of what we've already witnessed recently, with two of the FAANG stocks (Netflix and Facebook) being taken out to the woodshed, we need to think carefully about the potential for further surprises from this group.

First, let's clarify that FAANG is a bit of a misnomer. This group of Facebook, Apple, Amazon, Netflix, and Google is convenient shorthand for Big Tech, but there are a handful of other stocks that belong right alongside these five. Microsoft, Tesla, and Nvidia are the #2, #6, and #7 companies in the S&P 500 by market cap, and all share the massive valuation and tech orientation of the group. So there are at least eight stocks that belong in this "Big (expensive) Tech" group and there are a number of others (Broadcom, Adobe, Cisco, Salesforce, Qualcomm, Intel, etc.) that are kind of like the B-team.

(Fun fact: Cisco was the largest company in the world at the height of the dot-com bubble in March 2000 and while few people ever talk about it today, it's still #28 in the S&P 500.)

Second, let's review what has happened to Netflix and Facebook in recent months.

Netflix was the first to stumble back in November, missing expectations for earnings and future growth. It peaked on Nov. 17 (the same time the broader Nasdaq index peaked) and investors shaved -15% off its share price over the next month. Fast-forward two more months to the depths of January's market selloff and Netflix had been nearly cut in half (-48%) from its November high.

Facebook's stumble occurred just a week ago. Its earning miss on Feb. 2 was accompanied by questions about the company's recent pivot in focus, ability to continue reaching new customers, and especially continue delivering on ad revenue now that Apple is blocking certain features on mobile devices. (We tend to forget that even with the largest tech companies, disruptors often eventually get disrupted.) The reaction was severe: the stock fell immediately after-hours and opened the next morning -24%. One-quarter of the company's value, gone, literally overnight. At yesterday's low, Facebook had been cut by -33%. In a week!

It's important to point out that while these two tech giants stumbled and missed their earnings (while also suggesting that future growth was decelerating), most of the other big tech companies posted great earnings this quarter. Amazon saved the market from a likely big second leg lower the day after the Facebook debacle with a big earnings report. Others including Microsoft and Apple also posted strong earnings. But remember, these were fourth-quarter 2021 earnings. The game is getting harder as government stimulus disappears in the rearview mirror and the Fed gets closer to draining liquidity from the system rather than adding it.

Time for a trip down memory lane, courtesy of Julian Brigden of MI2 Partners:

I'd forgotten that Apple had kicked off the second phase of the 2000-2002 bear market this way, but it's a perfect cautionary tale. Because as we all know, Apple actually was worthy of all the hype it was getting at the time! Think about what was right around the corner for Apple: the iPod, iTunes, iPhones, iPads...they were about to become the biggest company in the world, both in literal market cap terms, and arguably in their impact on society over the ensuing two decades.

Why? Because the stock had gained so much over the prior few years and was trading at a valuation that was simply unsustainable.

But that was the dot-com bubble, we all know how crazy things were back then! Stocks don't go up like that anymore.

There's a chart of Apple, Microsoft, and Amazon — the three FAANG members that haven't bombed an earnings report yet.

But if we want to really have some fun, we need to add Tesla and Nvidia...

I kept the green Apple line on the second chart for reference — Apple is the top line on the first chart and the bottom line of the second. Tesla's stock is up roughly twice as much over the last three years as Apple's was over the three years prior to the 2000 peak. And as hard as it might be to imagine today, Tesla (as the 6th largest U.S. company) makes up a much greater weight in the market indexes than Apple did back then (Apple wasn't even in the top 20).

The 2000 analogy only goes so far. It's true that, as a whole, the Nasdaq valuations were crazier than today. And today's tech leaders really are amazing companies (for the most part) with incredible earnings.

But one more chart if I may... 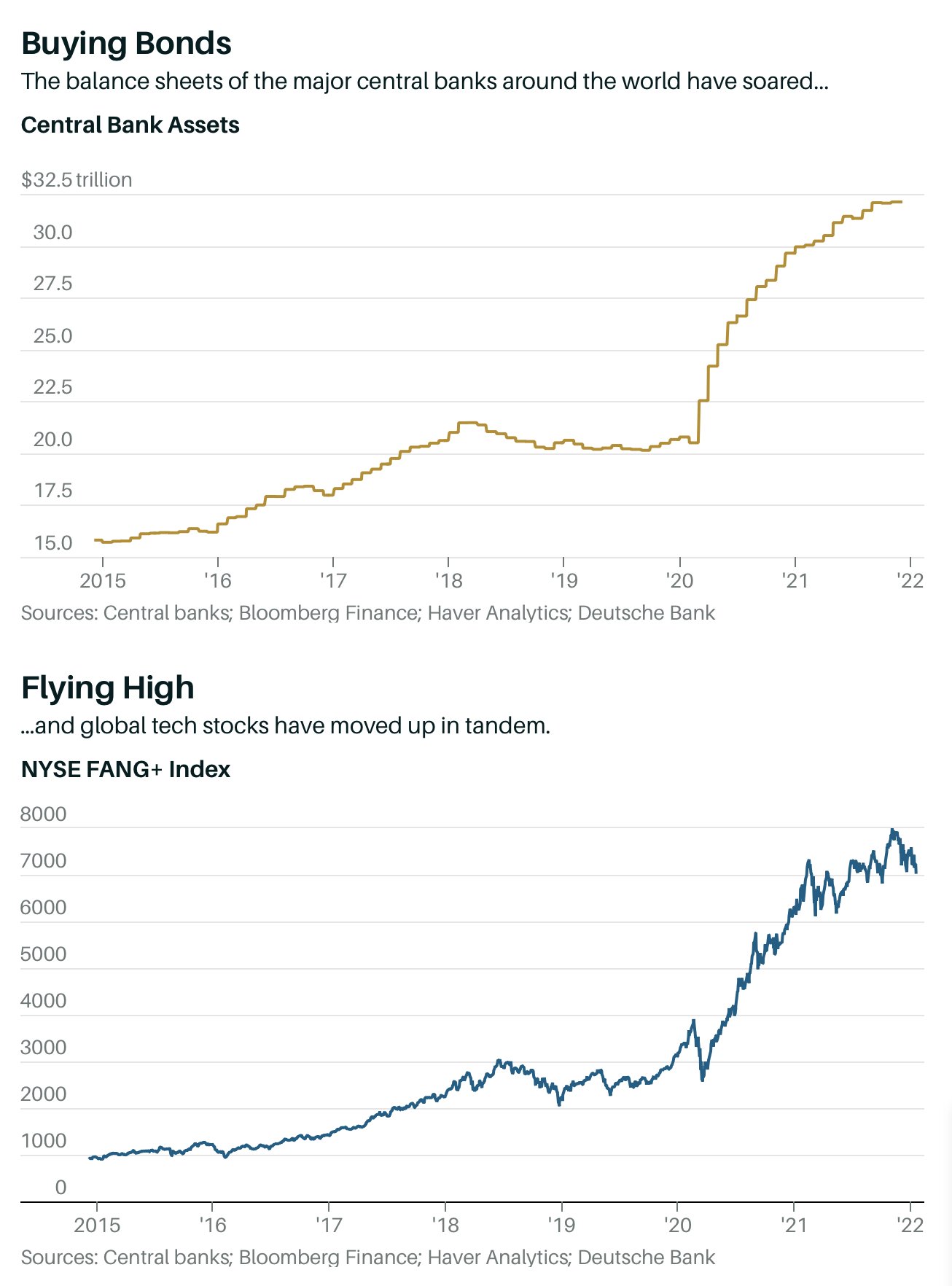 One doesn't need to be a technical analyst to see the correlation in these two Barron's charts. And while correlation is not causation, few investors disagree with the idea that central bank policies (specifically the Quantitative Easing bond-buying shown in the top chart) have played a direct and central role in the incredible returns U.S. investors have experienced over the past dozen years.

Which is why I think the market is nearing a potentially pivotal moment. Tomorrow's CPI report is likely to remind investors that inflation is still front and center on the Fed's radar. And while the Fed hasn't even stopped buying bonds via QE yet, much less actually hiked rates or started taking steps to unwind the massive growth in their balance sheets (shown in the top chart above), those steps are coming rapidly. Nearly all Fed watchers expect QE to end and the first rate hike to occur at the March Fed meeting. That's just a month away.

Each time the Fed has stopped adding to its balance sheet over the past dozen years, the stock market has wobbled. Those prior examples happened in disinflationary environments when the Fed could fairly easily pivot back to easy policies to support the market. Not so today.

This does not mean that the next move for stocks is lower. It doesn't guarantee we're going to see a bear market this year. It does mean that the road ahead is fraught with the risk that the Fed's actions will cause investors to cry "Uncle" before they're done, only this time the Fed may not stop turning the screws if inflation isn't yet under control.

If there's one thing the recent Netflix and Facebook examples — as well as the 2000 Apple experience — show us, it's that it doesn't necessarily take weeks and months for stocks to reprice dramatically when either their situation or the market environment (or both) change. Risk can happen fast. So while I still think (as I wrote in the 2022 outlook released in December) that the most likely timeline for any fireworks to begin is spring/summer, the fact that our strategies started reacting faster as a result of the January correction isn't surprising. SMI investors have a modest defensive allocation at this point, appropriate given the elevated risks as we stare down the barrel of a significant Fed policy shift in the months ahead.

My memory of the last two "real" bear markets (2000-02 and 2007-09) is that it's always uncomfortable. When the market is falling, you feel like your positioning isn't defensive enough. And when the market is going through one of its periodic counter-trend rallies, it feels like you're way too defensive. We've seen both sides of that coin just in the past two weeks.

Thankfully, we've got a process that will help steer us through the months ahead. If the worst is behind us, wonderful! We'll be getting back to more offense in no time. But if (as I suspect) we've just finished the player introductions and the actual game hasn't even started yet, the defensive positions we already have (and any more that we might add in the months ahead) will prove helpful before this inflation cycle concludes.