Home > Articles >Given the New Tax Law, Should You Pay Off Your Mortgage Faster?

Given the New Tax Law, Should You Pay Off Your Mortgage Faster?

Has the new tax law changed your outlook on paying down your mortgage?

The question of whether to emphasize investing/saving or accelerating mortgage payments is a perennial one, as noted in the June 2015 SMI newsletter:

[T]here's no one-size-fits-all answer. Your age, tax bracket, how long you expect to live in the house, your general attitude toward being debt-free, and what you do with tax savings related to paying mortgage interest all play significant roles.

But now, under the tax law that took effect in January, the "tax savings" consideration isn't what it once was. With a greatly expanded standard deduction — $24,000 for married couples / $12,000 for singles — the new law changes the math regarding accelerating a mortgage payoff.

One of the long-standing arguments against faster paydown has been, "You'll lose the tax benefit of having mortgage debt." Now, for millions of taxpayers who will no longer itemize their deductions, that argument doesn't hold water, as explained in a Wall Street Journal "Tax Report" column (behind paywall):

For 2017, 32 million tax filers got a mortgage-interest deduction. For 2018, that number will drop to 14 million, [according to Congress’s Joint Committee on Taxation].... Even for taxpayers who can still deduct mortgage interest, the expansion of the standard deduction means the value of this write-off will typically be lower than in the past....

For homeowners with a shrinking or vanishing interest deduction, here's the key question: Is the after-tax return on an ultra-low-risk investment lower than your after-tax mortgage rate? If it is, consider paying down the mortgage if you can.

"If you can" is a big qualifier, of course. In a recent post, we noted that huge numbers of people in the U.S. are living on the financial edge. They don't have enough "extra" money available even to consider the invest-vs.-mortgage-paydown question. But for many others, the question deserves serious consideration. 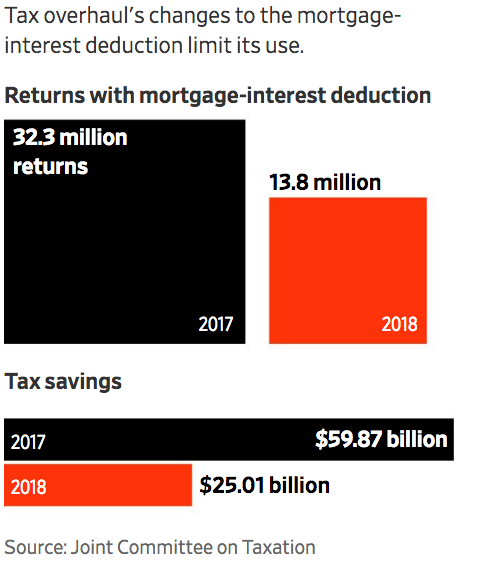 (By the way, if you claim the standard deduction going forward, your "after-tax mortgage rate," referenced in the WSJ excerpt above, will be the same as your actual rate. If you're among those still able to itemize under the new law, you can determine your after-tax rate by using the calculator here.)

Not surprisingly, in the comments section that accompanies the Journal article readers engage in series of impassioned pro-and-con arguments as to whether paying down a mortgage or investing makes the most sense from a mathematical standpoint. There are good arguments on both sides.

But I was struck by several comments from people who already have paid off their mortgages early. Almost all said "the math" wasn't really a consideration. For them, the most important thing was gaining a sense of freedom.

What's your outlook on accelerating payments and retiring your mortgage debt faster? Are you willing to cut back on other investments/savings to make that happen? And has the new tax law changed your outlook at all?

"Join the Discussion" below!

04/01/14 | Comments
When Is it Advisable to Prepay Your Home Mortgage?
By Matt Bell