Home > Articles >1st Quarter Review: The First Shall Be Last and the Last, First

1st Quarter Review: The First Shall Be Last and the Last, First

For the past six years, SMI and many others have pointed to the policies of the Federal Reserve as a primary driver of investment returns. The first quarter of 2015 continued to illustrate the importance of central-bank policy in investment performance — but with a twist.

With the U.S. having completed its quantitative-easing program that kept interest rates low, attention at home has shifted to the “guess when the Fed will start raising rates” game. Abroad, both Japan and Europe have initiated new QE policies, driving foreign returns higher, though these gains have been largely muted for U.S. investors due to the rising dollar and the cost of converting those foreign gains back into dollars.

As 2015 got underway, weaker economic data convinced many that the Fed would have to hold off on its first interest-rate increase longer than previously expected. Stocks lost ground on the perceived economic weakness, while investments that are sensitive to changes in interest rates (such as long-term bonds and real estate) soared.

Just as quickly, the tide turned in February. The economic numbers improved, stocks soared, and interest rates rose back to where they’d started the year. March flipped yet again to a milder version of January, leaving both the stock and bond markets up slightly for the first quarter. 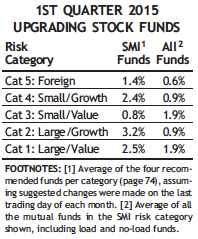 Over the past five years, the performance of our Upgrading portfolios has been strong in absolute terms, but weak in relative terms, as it has trailed the market (as well as SMI’s other stock-oriented strategies). So it was good to see Stock Upgrading at the top of the first-quarter leaderboard, with Just-the-Basics right behind it.

Both of these strategies benefited from a shift in market leadership away from large-company stocks and toward their small-company counterparts. And while foreign stock returns weren’t particularly great (again, after adjusting for the strong dollar and weakening foreign currencies), at least they weren’t the return-killing anchor they have often been for these strategies in recent years.

Bond Upgrading also had a strong quarter, though not without some volatility, with overall returns exceeding not only the Barclays U.S. bond index but the Wilshire 5000 stock index as well. Our investment in long-term bonds was the best performing segment of our bond portfolio, gaining 2.8%.

In our February report card, we discussed in detail the changes made to our long-term performance table (below). One aspect of those changes worth reviewing is how to calculate the performance of the various blended stock/bond Upgrading allocations (80% stocks/20% bonds, 60/40, etc.) that used to be included in these reports. Readers allocating a portfolio (or portion of a portfolio) between Stock and Bond Upgrading can simply use the two listed return figures to compute their specific result. For example, during the first quarter Stock Upgrading gained +3.5% and Bond Upgrading gained +2.2%. So a 60/40 reader would take (3.5%x0.6) and add that to (2.2%x0.4) to calculate the 60/40 Upgrading result of 3.0%. While this adds a step for some readers, breaking Stock and Bond Upgrading’s results out separately provides greater clarity and flexibility for readers who choose to use Bond Upgrading either as a stand-alone strategy or in combination with other non-Upgrading strategies. 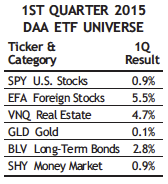 Based on this year’s first-quarter returns, one would have never guessed that DAA is SMI’s “risk-averse” strategy! Dramatic swings in interest rates — first lower, then higher again — pushed DAA’s monthly performance around more than we’re used to. Thankfully, by the end of the quarter, DAA had generated a healthy 2.8% gain, considerably better than the overall gains of the stock and bond indices.

Although DAA’s performance was more volatile than usual, it did continue to serve as an effective counterweight to the stock market’s performance. In January, as stocks fell, DAA soared. In February, it was the opposite: DAA fell while stocks soared. This aspect of DAA is probably underappreciated, as it gives SMI portfolios a more balanced feeling than our Upgrading-dominated portfolios typically had in the past.

For the first time in quite a while, SR wasn’t the shining star. In fact, it brought up the rear of our scoreboard this quarter, losing -3.6%. There’s no particular insight to be gained here, other than SR is a volatile strategy. As such, it’s going to take some unexpected zig-zags on its way to what has been remarkable long-term performance. The loss did result in the first SR fund recommendation change of 2015 as March ended.

This oddly titled portfolio refers to the specific blend of SMI strategies — 50% DAA, 40% Upgrading, 10% Sector Rotation — examined in detail in our May 2014 cover article, Higher Returns With Less Risk: The Best Combinations of SMI’s Most Popular Strategies. That article found this combination of strategies has worked synergistically in the past to boost returns while simultaneously reducing risk — the holy grail of investing. It accomplished this by adding the high upside of SR and the volatility dampening properties of DAA to an Upgrading base. (We report the results of this portfolio as if the Upgrading portion is 100% stock — no bonds. But in real life, if your risk temperament and season of life call for you to blend stocks and bonds in the Upgrading portion of this portfolio, then by all means do so.)

The first quarter demonstrated the benefits of blending these approaches, though admittedly not in the way we’re used to seeing it happen. Allocating a portion of a portfolio to each of these strategies would have helped take the sting out of SR’s loss, while also dampening the volatility in DAA this quarter. It’s also a good reminder why we’ve been slow to diminish Upgrading’s role too much, despite its less impressive results in recent years.

Investors are used to seeing annualized rates of return, but it’s less common to see “total gain” figures presented over extended periods of time. We think both types of data are helpful in evaluating performance, which is why the historical returns table includes both figures for each strategy over the prior 5-, 10-, and 15-year periods.

Annualized returns generally help investors put returns into an immediately useful context — we know what a good annual return is, whereas we might not immediately recognize if a large total return number is good or bad over an extended period of time. But total returns are useful as well. For example, comparing Stock Upgrading’s +7.9% annualized return over the past 15 years to the Wilshire 5000’s +4.6% makes it immediately clear that Stock Upgrading has beaten the market by a healthy margin. But the 15-year total-gain numbers deliver the non-intuitive additional information that Stock Upgrading’s total gain was actually more than double that of the market over the entire period: 212.2% vs. 96.3%. The annualized number wasn’t more than double, but due to the effects of compounding, the total figure was.

Of course, to lead to sound conclusions, the return data for these various strategies require context. For example, the 15-year returns of Stock and Bond Upgrading are extremely similar, which could lead someone to believe these strategies are likely to perform similarly in the future. But this ignores the fact that the past 15 years have been one of the best-ever periods for bond investors, and one of the worst-ever periods for stock investors. Over the next 15 years, then, we expect significantly better returns for stocks than bonds (perhaps more like the difference seen between Stock and Bond Upgrading’s recent 5-year returns).

Likewise, it would be easy to look at DAA’s incredible long-term total returns relative to Upgrading’s and think that replacing Upgrading with DAA across the board would be a good idea. But again, this ignores the fact that the recent 15-year period contained two of the worst bear markets in stocks in history, while being unusually profitable for bonds, real estate, and gold — all of which benefit DAA. It seems quite unlikely that both of those perfect storms — great for DAA, terrible for stock Upgrading — are going to repeat over the next 15-year period, which is one reason why we continue to recommend blending the two approaches.

Another example: The spectacular long-term results of Sector Rotation won’t ever materialize if you put half your portfolio in it, only to sell it all the next time SR drops 17% in 10 days, as it did at the beginning of October!

All of this is simply to say that while the return data are certainly helpful, context matters. We think it’s tremendously encouraging to look across the 15-year total-gain row and see that Upgrading, DAA, and SR lapped the market’s return 2x, 5x, and even 7x! Just be careful how you respond to this information. Risk management still matters, especially with the market having run with the bulls for so many years now.

What the long-term performance numbers fail to show is that the performance of each strategy ebbs and flows, marching to the beat of its own drummer to some degree. That’s what makes a well-conceived diversification plan work: if a portfolio includes enough dissimilar options, then at least parts of the portfolio will be performing well at any given time.

That fact is what drives our contention that rather than making either/or decisions, SMI readers are better served thinking both/and. Having part of your portfolio positioned to take advantage of market strength via Upgrading and SR can help keep discontentment at bay during strong years such as 2009 and 2013, while having a significant allocation to DAA (and/or Bond Upgrading) should help limit any damage — financial and emotional — when the next bear market arrives.