First Quarter Report: The Best of Times…the Worst of Times 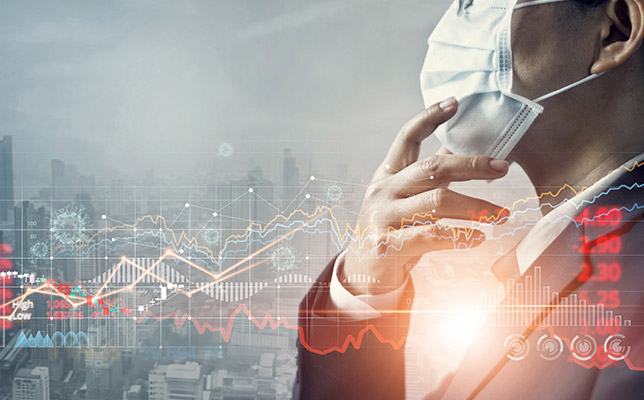 It’s easy to forget that there was a fair amount of anxiety among investors as 2020 ended. Would new COVID variants prolong the shutdowns? Would tax selling hamper the stock market once investors were able to book gains in the new year? These and other concerns caused many professionals to start 2021 conservatively positioned (that observation is based on the options market which offers insight into such institutional positioning).

That was decidedly the wrong way to be leaning, as the stock market hit the ground running in January and blasted higher through the middle of February. Stocks wobbled over the next month as interest rates moved sharply higher. The Nasdaq (tech stocks) and Russell 2000 index (small companies) suffered sharp but short-lived -10% corrections. But by the end of March, stocks had resumed their upward trajectory and the broad market was set up to register a series of all-time highs in early April.

As positive as conditions were for stocks during the first quarter, they were equally negative for bonds. The 10-year U.S. Treasury Bond yield rose from 0.93% at the beginning of 2021 to 1.74% by the end of March. The Barclays Long Treasury Index (which tracks Treasuries 10 years and longer) fell into its first official -20% bear market in 40 years.

Driving both the stock and bond market moves was the extremely positive direction of the U.S. economy. While the first quarter opened with questions, it closed with exclamation points, as much of the economic data in late March and early April was accompanied with phrases like “best ever” or “best in 20 years.”

These signs of a rapid recovery were music to stock investors’ ears, but the bond market recognized 2020’s low yields were woefully mispriced for such significant growth — and the potentially higher inflation that often accompanies such growth. While higher yields are certainly appropriate when the economy is growing faster, the adjustment from 2020’s “sharpest slowdown ever” to 2021’s rapid recovery was jarring for longer-term bonds.

Thankfully, SMI’s strategies had no exposure to longer-term bonds, while being fully invested in stocks. As a result, most SMI investors posted solid first-quarter gains.

Generally speaking, small company stocks tend to be more responsive to changes in the economic environment than large company stocks. We saw this a year ago as the economy seized up (small stocks fell further) and it was on display again during the first quarter of 2021, this time in a positive direction.

The small company Russell 2000 index gained +12.7% during the first quarter, far outpacing the +6.5% gain of the Wilshire 5000. This helped both JtB and Stock Upgrading, which were both overweight small company stocks. Foreign stocks lagged U.S. stocks during the quarter but the EAFE foreign index still posted a healthy +4.0% gain. The boost from small companies made up for the slight foreign drag, leaving JtB with a gain of +6.6% that slightly outpaced the broad U.S. market return.

Given the strength in small companies and commodities, it’s a bit surprising Upgrading’s performance wasn’t even better (though a quarterly gain of +6.2% is incredible in absolute terms!).

The other big story of the first quarter was the rotation away from growth stocks, which have led the market for several years, toward value stocks. Upgrading entered 2021 heavily tilted to growth but ended the quarter heavily tilted to value. As is normally the case when Upgrading goes through significant changes in trend leadership, there was some chop getting from the old leaders to the new ones, as the stars of 2020 became the laggards of 2021.

While our remaining growth holdouts held back Upgrading’s overall returns a bit, the switch from growth to value started paying immediate dividends in March. For example, the small/growth index sold at the end of February (IWO) fell -2.8% in March, while the small/value index bought in its place (IWN) gained +5.5%.

It’s not intuitive, but when actual economic growth is scarce (as it was last year), those stocks that can still deliver growth are highly prized. But as the economy picks up and many companies are able to grow their earnings in the better economic environment, value stocks tend to outperform. Given that growth stocks have been in favor for so long, we’re optimistic that Upgrading’s value-heavy positioning will have some room to run.

As discussed already, it was the worst quarter in decades for longer-term bonds. The good news is that Bond Upgrading was able to dampen those losses by being invested in much shorter duration bonds. While the Bloomberg Barclay’s U.S. Aggregate Bond Index fell -3.4% during the first quarter, Bond Upgrading was down just -2.4%. SMI members who added IVOL following SMI’s March profile did even better, as it was the only bond vehicle in the universe SMI tracks that posted a positive return during March.

It remains to be seen whether the recent spike in bond yields was largely a short-lived response to the historically low levels yields reached a year ago or if the trend in rising yields will continue. With yields having now moved back into the range they were in prior to COVID, it could be that the bulk of the bond losses are behind us. On the other hand, if the 40-year inflation trend has truly shifted and we’re now in an era of rising inflation and interest rates, there’s no way to sugarcoat the fact that bonds would be a difficult place to invest in that environment. See this month’s cover article for a broader discussion of this vitally important topic.

While DAA finished the quarter strong, posting a +4.0% March gain that was the strongest of the SMI strategies, it wasn’t a great quarter overall as it gained just +1.9% overall. While DAA’s stock holdings performed well, it was hurt by its exposure to gold, which it sold at the end of February. 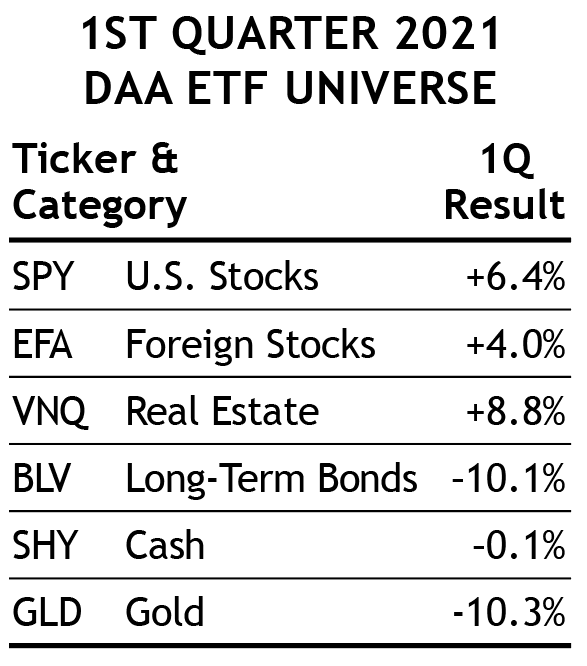 That gold would weigh down returns during a period of rising inflation expectations is ironic, given gold’s reputation as an inflation fighter. Unfortunately, as we’ve discussed before, gold’s strongest correlation is to “real” interest rates (that is, interest rates adjusted for inflation). During the first quarter, “nominal” interest rates (not inflation-adjusted) were soaring while the official measures of inflation were increasing at a slower rate. This caused real rates to increase and, as often happens in such environments, gold fell.

The good news is that once gold was removed, DAA’s performance markedly improved. March saw all three of DAA’s owned asset classes move up sharply, while the two DAA didn’t own were down sharply (along with cash, which was flat). Hopefully, this bodes well for the second quarter.

While SMI’s other “big three” strategies posted solid gains during the first quarter, Sector Rotation was the outlier with a -3.7% loss. Building on this article’s “best of times, worst of times” title, SR experienced “a tale of two halves” during the quarter, soaring dramatically through mid-February, only to plunge from that point through nearly the end of March.

There were two silver linings for SR, however. First, on February 10, just days before SR would peak and turn lower, SMI published an article titled, The Simplest Way To Reduce Risk, detailing why it might be an opportune time to pare SR allocations within SMI portfolios. Some members were able to reduce the losses that soon followed by promptly acting on that information. Second, after bottoming on March 29, SR rebounded +14.7% over the next two weeks (through April 13). So as with DAA, the quarter ended with this strategy back on the ascent.

This portfolio refers to the specific blend of SMI strategies — 50% DAA, 40% Upgrading, 10% Sector Rotation — discussed in our April 2018 cover article, Higher Returns With Less Risk, Re-Examined. It’s a great example of the type of diversified portfolio we encourage most SMI readers to consider. (Blending multiple strategies adds complexity. Some SMI members may prefer an automated approach.)

Sometimes even when you accurately discern the right investing trends, performance doesn’t always immediately follow. Consider all that our portfolios had right in terms of positioning during the first quarter: Upgrading added commodities which performed great, it also had small companies overweighted and was quick to pivot from growth to value during the quarter. DAA was two-thirds invested in stocks all quarter as they marched higher, plus had exposure to the typically inflation-resistant gold asset class. Despite all this, overall returns for a 50/40/10 portfolio were rather pedestrian at +3.1% for the quarter.

Context is crucial in these situations. The quarter immediately preceding this one (Oct-Dec 2020) was one for the ages, with Stock Upgrading up a blistering +19.9% while Sector Rotation soared +37.5%! This was the tail end of the powerful growth stock rally that had begun last April.

Given that the market leadership transitioned rapidly during the first quarter, it’s not surprising that a portfolio dominated by those former winning positions would experience some turbulence as it transitioned many of its holdings based on new market leadership. If the value rotation persists, our portfolios are set up beautifully for what’s ahead.

Only time will tell if the changes discussed here and in Balancing Inflation Fears With Market Realities are lasting or transitory. One thing is sure though — SMI is paying careful attention and has positioned our strategies so as to be able to respond appropriately either way. If we are in a new inflation regime, investors who are slow to respond will suffer for it. We may not get every future twist and turn exactly right, but it won’t be for lack of preparation!