This article is written primarily for those who participate in 401(k) plans that offer only a relatively few stock funds from which to choose.

While SMI's Upgrading strategy has been quite successful in recent years, it involves picking from more than a thousand stock funds spread across five asset classes (which we refer to as risk categories). What do you do if you'd like to Upgrade in your 401(k) but are given just a handful of funds from which to choose, some of which are poor performers?

We've done some research that suggests a possible fallback strategy. However, there's a trade-off involved. In return for a shot at better performance, you're going to give up the relative stability you get when you diversify across all five of the major stock categories as we normally recommend.

With this approach, you go with the best-performing funds available to you regardless of the asset class in which they fall. Depending on which funds are offered in your particular 401(k), you could conceivably end up having all your money in just one or two of the risk categories (for example, in small-cap growth funds, or large-company value funds, or foreign funds). Concentrating in just one or two kinds of funds in this way raises your risk.

This means it's very important to check your funds monthly and follow the selling rules faithfully. If you're heavily invested in an asset class that starts to fall significantly, the system will automatically move you to funds that are doing better. But "user error" can undermine even theoretically sound systems. Your selling discipline is your life preserver. Use it!

So, with that background in mind, here's how you can apply the strategy in your situation. 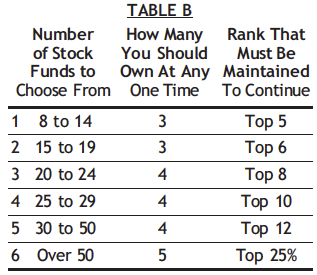 We devised the table with the idea of eventually using the top 25% cutoff (as we do in regular Upgrading) as the number of available funds in a 401(k) grew. The numbers you see in the table felt "right" as we considered how the strategy would play out in real time, but admittedly are arbitrary. You can adjust them if it seems appropriate to you to do so. The goal is to set a high standard, but not so high that you make it difficult for the fund to maintain it (in which case you would continually be selling funds when they falter only slightly).

Our readers participate in thousands of 401(k) plans, most of which have different lists of funds from which to choose. So, it's impossible to generalize with confidence concerning the degree of success you might expect when applying this research to your particular plan. Still, the backtesting results obtained so far are encouraging, and signify to us that, if you have at least a few strong performers among your list of options, you have a very good chance of getting market-beating results. Bear in mind, however, that a higher level of risk may accompany those results due to over-weighting in just one or two of the five stock risk categories.

The Story of Generosity