Don’t Look! Blissful Ignorance Can Be Your Investing Ally

This past August, the stock market broke out of a period of unusual calm by surprising investors with the first 10% correction in four years. The swiftness of the decline was shocking — stock prices fell as much as 8% on the morning of August 24 alone. But as quickly as the correction had sprung up, it was over. The market hit its low the next day and has recovered most of that ground during October's rally.

For as much fear as the correction stirred up, the actual decline was over within two weeks (though as the chart below shows, the market would bounce around that lower level for the next several weeks).

Here’s the point. Unless you just happen to like high levels of stress, it doesn’t pay to follow the daily movements of your portfolio. Sure, it may seem like daily performance information is helpful, or at least not harmful. But most of us simply aren’t wired to process significant swings in our investments without a commensurate swing in our emotions. Emotional upheaval causes us to want to “do something” in response — something like “get out of the market until things settle down.” Unfortunately, that kind of short-term emotional response almost always undermines the long-term appreciation of one’s portfolio. 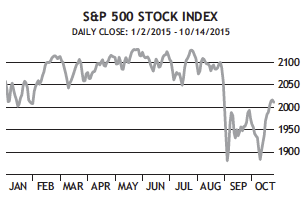 If your investing time frame is more than five years — which it should be for you to be in the stock market at all — there’s a strong likelihood (if history is any guide) that the dollars you invest today will appreciate by the time you need to take them out.

The longer your time frame, the more the odds are in your favor. As the old saying goes, “It’s time in the market, not timing of the market, that makes the difference.”

It may seem counter-intuitive, but research has indicated that investors who do less, earn more. Financial columnist Jason Zweig drew attention to this in the late 1990s, reporting on the research of Harvard psychologist Paul Andreassen. Andreassen’s series of laboratory experiments testing how investors respond to financial news showed that those who ignored the news earned much more than those who closely followed it.

Other research has shown that investors who evaluated their portfolios monthly tended to move money out of stocks and into bonds in response to stock-market volatility, whereas investors who only looked at their portfolios annually had much better overall performance as a result of sticking with their higher stock allocations throughout the years.

Being successful over the long haul requires that you protect yourself from your emotions. You must train yourself to think like a long-term investor rather than a short-term trader. That involves establishing a realistic long-term investing plan, and sticking with it through thick and thin.

Plan your market exposure in advance

If you’re manually implementing any of SMI’s strategies other than Just-the-Basics, you can’t avoid checking your holdings every so often — typically once-a-month. (And if even monthly exposure tempts you to make unplanned changes, you may want to choose an automated option that implements the SMI strategies on your behalf, removing you from that monthly process.)

Simply put, the only time you really need to look at your portfolio is when it’s time to take a predetermined action that’s based on your long-term plan, such as replacing one fund with another at the regularly scheduled intervals, or rebalancing your portfolio at year-end.

Of course, it’s tempting to think there is a more profitable approach. All of us hear the “siren song” of trying to sidestep losses by selling out now and buying back in later. But your gut is likely a horrible predictor of how the market will behave in the future! As those who panicked at the August lows are learning, selling might accomplish nothing more than locking in losses, because the market could very well hit bottom and turn higher just as you head for the door.

So if watching your portfolio go up and down has you all stressed out, the simple solution is to just look the other way — until your plan tells you it’s time to look. When that time comes, check your holdings, take whatever action is needed (based on your plan), then get on with your life. And no peeking.