Don’t Be Surprised if Target-Date Funds Miss the Mark 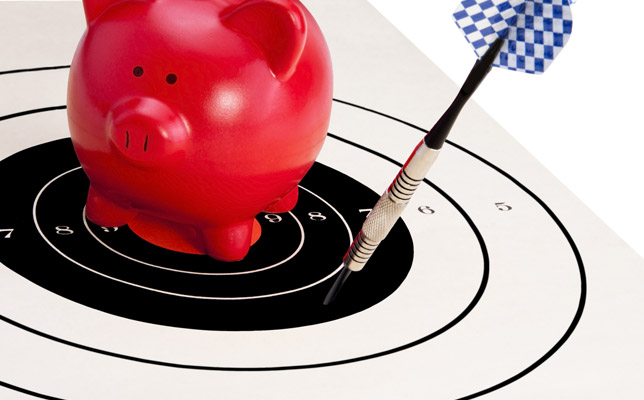 As a general rule, an investment portfolio should be weighted toward the stock side when an investor is young, then move toward bonds as the years go by. An investor is thereby positioned for asset growth in their younger years (with ample time to recover from market losses), but then dials back on risk and preserves gains as retirement age nears. (It should be noted, however, that SMI’s Dynamic Asset Allocation strategy takes a different approach to balancing growth and safety.)

Trying to follow the more-bonds-as-time-goes-by guideline raises a few questions: When should you start cutting back on stock-based investments? What kind of bonds should you buy? How much “de-risking” is too much? How little is too little?

In the early 1990s, mutual-fund companies rolled out an investment option aimed at freeing investors from having to wrestle with such questions: the target-date fund (TDF), sometimes called a life-cycle fund.

Such funds got a big boost in 2006 when Congress passed legislation that encouraged employers to auto-enroll workers in company retirement plans, while also allowing the employers to set a target-date fund as the default investment option.

Employees, rather than being faced with a dizzying array of options as before, were presented the alternative of a simple, all-in-one solution — one that would automate the “downsize-stocks-bump-up-bonds” process on a predetermined schedule. The employee had only to pick a target date — typically a year close to planned retirement. For example, a worker intending to retire in 2034 could simply pick a “2035 Fund” — whether offered by Vanguard, Fidelity, T. Rowe Price, BlackRock, or any of the three dozen other companies offering 2035 funds.

The 2006 legislation turbo-charged target-date products. TDF mutual-fund assets have risen from about $110 billion in 2006 to more than $1 trillion at the start of 2019. An additional $677 billion is now invested in target-date “collective investment trusts,” a lower-cost alternative to mutual funds available via many qualified retirement plans (the asset figures reflect both strong inflows and asset growth).

Vanguard, by far the largest TDF provider, reports that 77% of participants in Vanguard-managed retirement plans are now using target-date investments, up from only 18% in 2007.

What’s under the hood?

The holdings in a target-date fund typically are a collection of underlying funds from the same fund company offering the TDF. Because each company has its own perspective regarding what constitutes an appropriate asset allocation, even for investors of the same age, TDFs focused on the same retirement date can vary widely in their portfolio mix. Taking the 2035 universe as an example, the Fidelity Freedom 2035 fund has 86% in stocks, roughly 11% in bonds, and 3% in a commodity fund. Meanwhile, the Vanguard Target Retirement 2035 fund (note the identical target date) has 76% of its assets in stocks, with the rest in bonds and cash.

Which is better? That’s difficult for even the experts to say, much less the ordinary investor looking for simplicity. 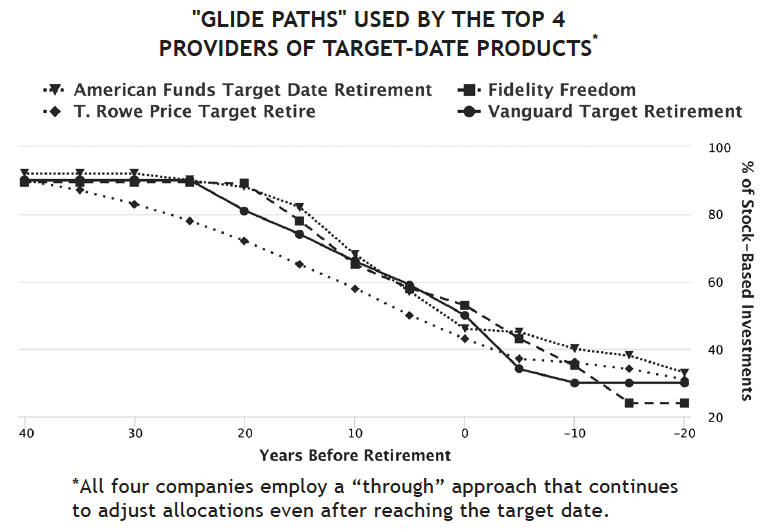 The asset-allocation disparity among funds with identical target dates came into the spotlight following the 2008 financial crisis. As it turned out, some funds with a 2010 target date had about 20% of their holdings in stocks, while others had more than 50% in stocks. Not surprisingly, performance differences were significant, ranging from modest losses of -3.5% to massive losses of -41.3%. (Remember, these were funds labeled as being appropriate for those planning to retire in 2010, just two years later.)

Another key difference in approach among similar-sounding funds comes down to the difference between the words to and through. Some funds use a “glide path” — i.e., how the mix of stocks and bonds changes as the target date approaches — designed to take the investor “to” retirement, meaning the fund will adopt its most conservative allocation by the time it reaches the target date. (In some cases, the target fund is then merged into a fund focused on generating regular income.) Other TDFs use a “through retirement” model that doesn’t reach its most conservative allocation by the target date. Instead, the fund continues to reduce stock-based holdings for several years thereafter (see graph).

It is worth noting that some investment researchers have suggested that target-date glide-paths should reverse after retirement, once again becoming more growth-focused. This approach, they argue, would help ensure that investors who live for two or three decades after retirement don’t run out of money. Thus far, however, no major company offering TDFs has adopted a reverse-glide-path model.

A target-date product is presented as a “one size fits all” investing approach based on a projected retirement date. Unfortunately, one size doesn’t fit all.

Although a guideline based on age (or retirement date) is better than no guideline at all, an investor should, if possible, take other variables into account when choosing a portfolio mix. The best approach is to incorporate not only one’s projected retirement date, but also risk tolerance, savings level, health, and so on. A target-date product can’t do that. It is a blunt instrument. And, as noted, how that instrument is wielded can vary widely from one fund company to the next.

That’s not to say there’s no place for target-date products in the investing landscape. As a default option in a company retirement plan, a reasonable, low-cost TDF is likely an improvement over what the typical plan participant would otherwise choose.

But in our view, SMI members — who have access to our various strategies and the Personal Portfolio Tracker — are likely to be better off keeping as much control as possible in their own hands, rather than delegating asset-allocation and diversification decisions to a target-fund manager. Maintaining control will help ensure that you have a personalized plan that aligns your investment choices with your particular temperament and goals. (SMI's risk tolerance quiz and allocation calculators can help.)

Again, there is nothing wrong with investing in a target-date fund. If you have only a few investment choices in your 401(k) plan, a TDF may be the best option. But before you invest, research the details. Understand a specific fund’s portfolio mix and its “glide path” for moving toward more fixed-income investments as retirement approaches.