Home > Articles >Does the National Debt Matter? No – Unless It Does

Does the National Debt Matter? No – Unless It Does

In last Friday's Money Roundup, we linked to a couple of opinion pieces arguing that the size of our federal debt (now at $23 trillion) isn't a problem. Therefore, we needn't be concerned about adding about $2 trillion more to the debt in response to the economic/medical challenges of COVID-19.

In recent days, I have read several articles along this same line: the size of the federal debt doesn't matter as much as the government's ability to service the debt. As long as the economy grows, and especially if interest rates stay low, there's not much to worry about. We owe a lot, but we can afford it.

Perhaps that argument is right. But no one really knows.

But Washington does face one very real long-term challenge: it must ever and always maintain the financial confidence of the world, including its own citizens.

Where the money comes from

Our federal government pays most of its bills with money that comes from taxes and tariffs. But since that income isn't sufficient to cover all the government's spending, Uncle Sam borrows the rest of what it needs via the sale of Treasury bonds and bills. Such borrowing covers the yearly "budget deficit."

Many decades of accumulated annual deficits now add up to about $18,000,000,000,000 ($18 trillion). This is called the "debt owed to the public." The remainder of the $23 trillion in federal debt is owed "internally" — mostly to the Social Security Trust Fund and a few other government accounts.

The reason businesses, individuals, and governments of other nations are willing to lend to the U.S. government (by buying bonds and bills) is because they're confident that Washington will pay interest on time and will pay the principal back when it comes due.

And Washington always does, typically by borrowing even more money. In other words, the government pays off old debt with new debt. And, in most years, it issues many billions in additional debt to boot.

This "borrow to pay the bills" system has always worked, and it will continue to work — unless someday it doesn't. Should enough people ever grow concerned about Uncle Sam's ability to repay, the market for T-bill and bonds would dry up. Trouble would ensue. Faced with fewer buyers, the government would be forced to offer higher rates, making servicing the debt even more challenging. In a worst-case scenario, the government might not be able to sell enough new debt to pay off its old debt. A default would make the crisis of confidence far worse. 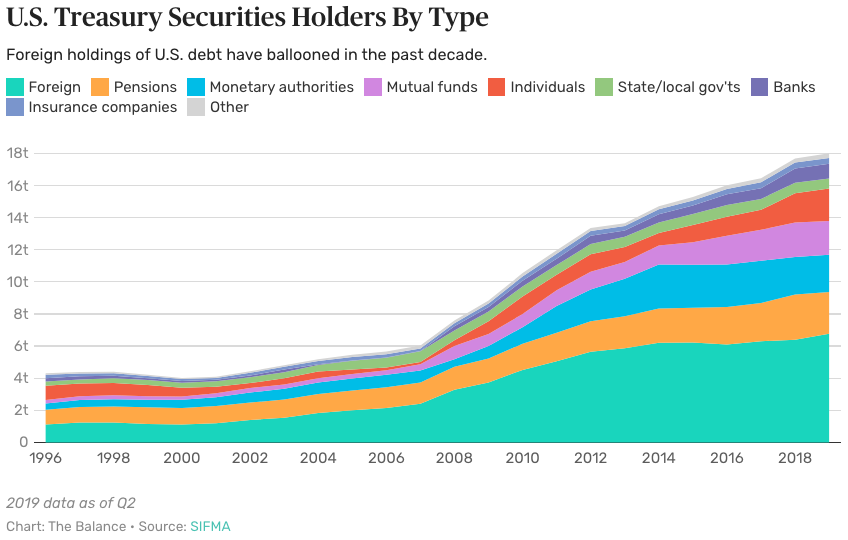 Maybe there's nothing to worry about

Such a day of reckoning may never come — especially if interest rates stay low and economic growth is strong (which brings in higher tax revenue). And even if bad times arrive, with high rates and stagnant growth, the U.S. will always be "the best house in a bad neighborhood," to quote the popular metaphor. In other words, investors will always turn to the U.S. because, compared to all the other nations of the world, the U.S. government will be the least likely to fail to pay its bills.

Plus, the Federal Reserve is ready to step in as a purchaser of government debt if need be.

It should all work fine. Unless, someday, it doesn't.

Money Roundup: A Tale of Two...