This post may come as a bit of a surprise, because admittedly SMI has never been a big proponent of holding cash within an investment portfolio. Generally speaking, we think those who tend to "raise cash" in anticipation of future market declines generally harm their investment performance more than help it. This type of haphazard timing has been shown by numerous studies to diminish investor returns.

That said, I was surprised to see the percentage of the time that cash (t-bills) has historically outperformed both stocks and bonds. Here's the chart from Mark Hulbert's recent article on the subject: 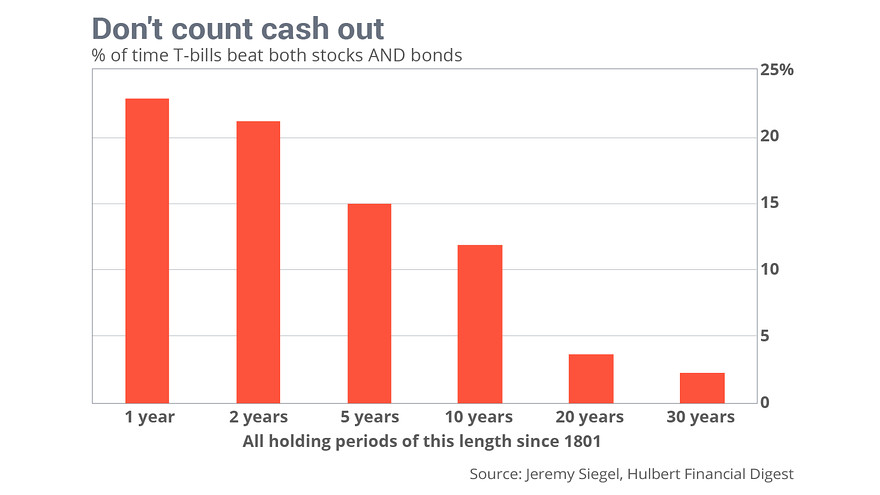 The one and two-year numbers aren't all that surprising. Despite the common perception that bonds usually go up when stocks decline, there have been plenty of instances when that hasn't been the case. (See myth #5 in our October cover article, Debunking Market Myths, for more on this idea.) But the 5-year and 10-year columns definitely caused me to raise an eyebrow. 15% of all 5-year periods have seen cash outperform both stocks and bonds? That's surprising.

I suspect that most of today's investors will find those numbers surprising as well. Cash hasn't outperformed both stocks and bonds for a full calendar year in 25 years (1990), so it's been a while. And it's fair for today's investors to not think much of cash as an investment vehicle, given the near-zero returns it has been providing for the past several years.

Hopefully this historical knowledge will make it a little more palatable when our DAA shifts us into cash, as it did earlier this year. Sometimes, those "brief" efforts to dodge declines in other asset classes don't end up being as brief as we might intutitively expect. We're certainly not advocating anyone "wing it" and start adding cash positions to their portfolios outside the guidelines of our mechanical strategies. But within them, it can make sense at times.