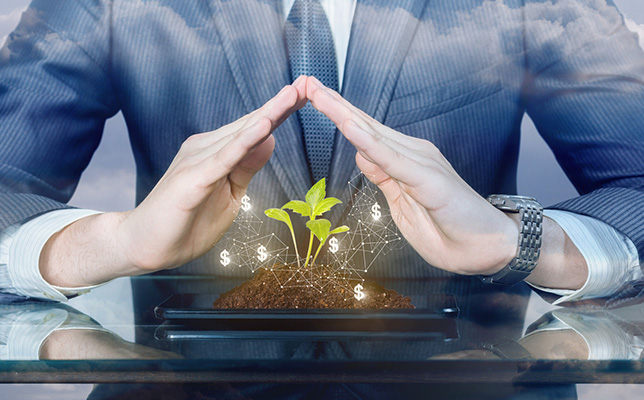 September’s cover article on the U.S. dollar presented two ideas related to commodities. First, the impact of a falling dollar is often initially seen in a rise in commodity prices — specifically at the gas pump and the grocery store. Second, the inflation many expect to (eventually) result from the massive expansion of government borrowing and spending could push commodity prices higher still.

“Real” assets have always been desirable during inflationary periods. Gold and real estate are included as options within Dynamic Asset Allocation largely because of their reputation as inflation fighters. Investing in other real commodities follows a similar idea.

That said, most modern investors don’t have much practice with the anti-inflation playbook, as inflation has been mostly declining for the past 35 years. Here’s an overview of how an investor can easily add exposure to the commodities asset class, and a look at when adding that exposure might be most advantageous.

Tools of the commodity trade

Commodities typically trade via the futures market, but as Austin relates in The Sound Mind Investing Handbook, that’s a complicated and risky market for individuals to participate in. Thankfully, it’s not necessary. When commodities had their last stretch of superior performance as a result of a steadily declining dollar during the 2000s, SMI investors were able to tag along to some degree via their normal Fund Upgrading holdings, as well as Sector Rotation’s trades in Energy stocks. We would hope both of those strategies would again prove helpful should we see a turn toward a more inflationary environment.

That said, investors also have several direct options at their disposal if they want to add commodity exposure to their portfolio. SMI investors are familiar with GLD, the gold ETF (exchange-traded fund). Most other commodities also have one or more ETFs that track their specific performance. But a better way to add exposure to the broad asset class is via a diversified commodities ETF or mutual fund.

While there are many options, our ETF choices are the DB Commodity ETF (ticker: DBC) and DB Agriculture ETF (ticker: DBA). The primary difference is DBA focuses solely on the 11 agricultural commodities, whereas DBC expands on those to include significant oil/gas exposure as well as precious metals. (These ETFs are cheap and easy to buy and sell, they are not tax-friendly. It's better to avoid these if you're investing within a taxable account.)

(Editor's note: In 2021, we became aware of PDBC, a similar but in our opinion better alternative vehicle. See the November 2021 fund write-up for more details.)

While these ETFs offer perhaps the easiest exposure to the broad commodities asset class, they’re not necessarily the best way to achieve it. There’s a strong argument in favor of active management when it comes to commodities — not only due to the way the indexes weight the various commodities (particularly oil, which tends to weigh heavily) but also the technical nature of how futures contracts roll from one period to the next. Active managers can potentially add value in both respects.

So one approach might be to add a half-dozen of the top actively managed diversified commodities funds to an SMI Tracker portfolio, along with DBC and DBA. Then let their recent momentum scores determine which fund to use. Leaders will change over time, but our review indicates the following tickers would comprise an attractive group of potential candidates: EAPCX, BCSAX, SPCAX, PCRAX, JCRAX, CMCAX. (Several of these may carry loads at some brokers. Make sure any funds you purchase are either no-load or load-waived at your particular broker.)

Adding commodities exposure may seem like a great idea, given they have historically been an excellent portfolio diversifier due to their low correlation to stock and bond returns. Plus, they had been great performers (until September), with most of the previously listed funds having gained +15% or so over the three months ending August 31.

However, if the primary reason for adding commodities exposure is to hedge against inflation, adding it now is likely premature. Yes, commodity prices have risen sharply since the economic reopening in May, but those increases were from deeply depressed levels. Even after their recent surge, both DBA (Agriculture) and DBC (Commodity) still had negative year-to-date performance as of mid-September, before falling sharply late in the month.

While the “reflation trade” boosted commodity prices following the global shutdowns this spring, it’s hard to argue that higher inflation is likely until the economy is solidly in recovery mode. Longer-term, as that occurs, a shift toward rising inflation is easy to envision.

But that’s not happening at present. With employment statistics trending in the wrong direction lately and banks having dramatically tightened lending standards, it’s difficult to see inflation becoming an issue until 2021 at the earliest. And as September reminded us, worries regarding a slowing economy can produce sharp declines in commodity prices.

Bottom-line: For those wanting more direct inflation protection than the standard SMI strategies provide, taking a little money out of stocks to put into commodities is an easy way to get it. It’s reasonable to set up a Tracker portfolio now and familiarize yourself with the options, but there’s no rush to add that exposure until the economic recovery is on steadier ground.

Hopefully, that happens sooner rather than later, but we suspect there’s still some tough economic sledding ahead before any inflationary forces begin to be felt.