It's very unusual for the stock market to fall as far and as fast as it has this December. This type of decline is what we normally see at the end of long bear markets, not at the beginning. But the market isn't a predictable circus animal, as much as we'd like to convince ourselves that it is.

We build models based on past market behavior, but ultimately those are loose guides, not exact blueprints for what will happen next time.

Before making a few observations regarding what we've seen, I want to first point out that SMI's Bear Alert indicator officially triggered this past Friday. That simply means the S&P 500 put in its first weekly (Friday) close at a level more than -15% below the prior high. The Bear Alert doesn't carry much significance anymore, having been superseded by more precise signals from both Dynamic Asset Allocation and Upgrading 2.0, but there may still be some members interested in knowing this just occurred.

Back to the December market, here's a chart from Michael Batnick's blog, The Irrelevant Investor, showing all the times the S&P 500 declined by at least 1% over 4 consecutive sessions, (which happened last Wednesday through Monday). 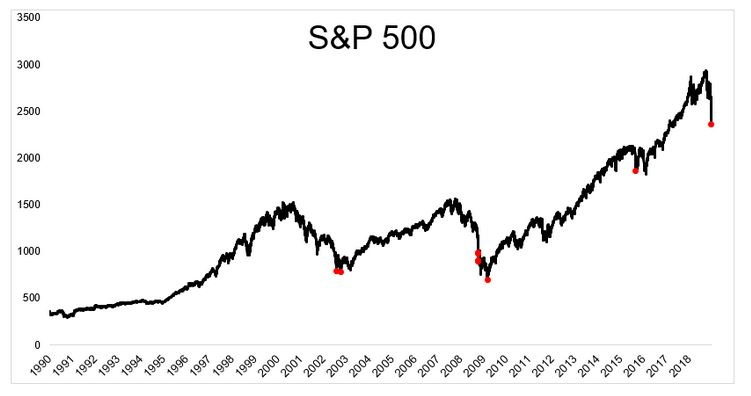 Interesting information, although I'm not sure it tells us a tremendous amount about whether we're actually in a bear market. Clearly the bulk of these instances have come toward the end of bear markets (2002, 2008-09). But we also have an instance in 2015, which was definitely not a bear market, as well as October 1987, which was technically a bear market (and perhaps the most terrifying single day in market history) but one that most people gloss over because it was so short-lived and the bounce back was so strong.

That said, the market behavior we're seeing is definitely what we associate with bear markets. Yesterday's huge counter-trend rally was actually right out of the bear market playbook, with periodic sharp rallies occurring just often enough to keep many investors engaged all...the...way...down.

One of the better "perspective" posts I've seen recently comes from Ben Carlson at A Wealth of Common Sense. I encourage you to click the link and read the whole thing, but here's the gist: After pointing out that the market's performance during the 4th-quarter of 2018 (through Monday, so before yesterday's big rally) would be the 14th-worst of the S&P 500's more than 370 quarters since 1926, Carlson goes on to show how the market performed after the worst 13 quarters prior to this one. He then whittles that group down to the post-Depression cohort to present this table:

Obviously, the returns following similarly brutal quarters have been fantastic for those that have been willing to hold their noses and stay invested. The caveat is, again, that most of these examples happened at the very end of prior bear markets, which benefitted from the strong bounce off the bottom into a new bull market. Given the 10-year bull market we just experienced and the fact that an all-time high was set barely three months ago (September 20), it seems highly unlikely that what we've experienced lately would represent the full extent of a bear market that would push the reset button and set the stage for a new bull run. That would be awesome, but it doesn't seem realistic.

Basically what we've got is a historically steep decline that doesn't fit particularly well with historical precedent. Normally bear markets don't rip right out of the gate — they build slowly and then inflict most of their damage toward the end. But "normally" only covers a relatively small number of samples, so it's certainly possible this could be a bear that is simply doing things differently. Then again, barely three months into this decline, it's still plausible this isn't truly a bear at all. Only time will tell. But in the meantime, market behavior has certainly turned more bear-like. And the market's trends have clearly broken down to the point where it makes a lot of sense that the defensive measures in our strategies are taking action.

A final point on SMI's defensive measures, in light of the type of information Carlson and others have presented about the fact that buy-and-hold investors should be fine without taking defensive actions. This, of course, is true — it was SMI's approach for decades, until recently. The problem with that information isn't that it's untrue, it's that so many investors can't seem to follow it. Despite their best intentions to hold tight, their emotions get the better of them.

Recognizing that many investors are going to "do something" in the face of a roaring bear market, we decided to build that "something" right into the strategies so that the actions taken are disciplined, objective, and — if the new bear market remotely resembles past relatives — should help investors come out ahead of simple buy-and-hold. Not necessarily every time, but over time.

12/20/18 | Comments
Upgrading 2.0 Defensive Protocols Have Been Triggered
By Mark Biller