Right on schedule, the stock market is dropping as we hit May. For those who may not be familiar with the old "Sell in May and go away" advice, this is a familiar annual seasonality pattern for the stock market. We'll recap the basics of this topic, then I'll give you my thoughts on this year's signals in the last section of the article (so feel free to skip to that if this is old hat for you).

Starting 20 years or so ago, SMI alerted members to the annual seasonality pattern whereby the stock market has historically tended to perform much better on average between November-April than between May-October (see this old Introduction to Annual Seasonality article for details). This is, of course, an average based on many years of observation, and any specific year can vary dramatically from that long-term trend. But it is a pattern that has persisted long enough, and across global markets as well as here in the U.S., so as to have attracted quite a bit of attention over the past two decades.

The basic idea of annual seasonality, then, is to sell stocks at the end of April and buy back in at the end of October. (“Sell in May and go away.”) Some years later, SMI began making a further refinement to this basic seasonality approach by looking to "fine tune" the buy and sell signals based on a mechanical indicator called MACD (moving average convergence/divergence).

Questioning the value of investing seasonality

However, SMI has stopped paying much attention to annual seasonality in recent years due to two significant new developments. First, our investigation into the impact of the election cycle on annual seasonality found that there is actually only one (out of four) unfavorable periods during which stocks have, on average, lost money. That is the May-October period leading up to the U.S. mid-term elections (which would be next year — 2022). The other three unfavorable periods, including the one we’re entering this year, have still been positive on average. Which leads one to question the wisdom of making significant changes to an otherwise well-designed portfolio during these other unfavorable periods.

In other words, even those who want to apply annual seasonality as part of their investing plan would have a compelling case to only alter their base asset allocation during the mid-term election year unfavorable period (and potentially the following favorable period, which has been abnormally strong, on average). The other three years, they would leave their allocations alone and ignore annual seasonality.

The second reason to question the value of continuing to apply annual seasonality signals stems from the research behind the Dynamic Asset Allocation (DAA) strategy, which launched in 2013. DAA has a timing element built into it that triggers changes between six asset classes all year long, irrespective of the annual seasonality cycle.

How much better have DAA's signals been than annual seasonality's? We haven’t done exhaustive research on this, but a quick analysis done a few years ago indicated that over the prior two dozen years, using DAA would have produced better than triple the returns of applying simple annual seasonality to stocks. (That's using the standard April 30 and October 31 exit and entry points, not the MACD refinement.)

To be fair, no one ever claimed annual seasonality was a finely-tuned timing instrument. It’s a blunt, simple device to improve on buy-and-hold stock market investing. DAA is purposely designed to give us more specific signals and it requires a lot more — someone has to calculate and track the momentum scores and potentially alter their holdings every single month instead of just twice a year.

But for the SMI member, the issue is quite a bit simpler. The DAA information is available every month in a very simple format. Given that these signals have been significantly better than annual seasonality’s, and they are so easy for SMI readers to obtain, it’s hard to imagine why someone would continue to use the blunt instrument approach of annual seasonality any longer.

Unless, of course, they're applying it to an account where using DAA isn't feasible. It's primarily for these readers that we continue to report on the seasonality MACD buy and sell signals. But for everyone else, we believe DAA offers better timing cues than annual seasonality.

If you do use investing seasonality

Even before the creation of DAA, SMI always maintained that annual seasonality should only be used as a small refinement to your existing long-term plan, rather than being used as an "all in" vs. "all out" tool. As such, we've always recommended making measured changes to your stock/bond allocation, even when SMI was more open to using annual seasonality at all.

For example, someone who would otherwise have a 70/30 stock/bond allocation might choose to lower that to 60/40 during the unfavorable summer period, then raise it to 80/20 during the favorable winter period. That would give them an average allocation close to their ideal, optimized to correspond with the market's long-term statistical pattern. (Some readers have found that using automated versions of the SMI strategies makes this semi-annual switching process easier.)

Another idea that has been popular with readers in the past is to switch a portion of their portfolio back and forth between a more aggressive strategy, like Upgrading, and a more conservative one, like DAA. Along those same lines, some might choose to pare back their Sector Rotation allocation during an unfavorable period such as this.

With all of that said, the 2021 sell signal has triggered just as we hit the April/May transition. It was a little less clear than usual this year, as there's a discrepancy between the various indexes — the S&P 500 tipped negative first, the Nasdaq has just turned in the past few days, and the small-company indexes haven't given a sell signal yet. But on balance, it's pretty clear they've tipped negative overall.

Importantly though, keep in mind that there's nothing magical about an MACD sell signal. For example, this is the 10th such signal switch (in either direction) for the S&P 500 index so far in 2021 (in just four months). These are just short-term, fine-tuning signals that help when you are already planning to make a particular move anyway, such as selling around the beginning of May.

It's worth noting that the S&P 500 was setting its 9th all-time high of April last week as the MACD was turning negative. It would set a 10th new all-time high just last Thursday.

Here's a chart of the S&P 500 over the past five months. Clearly, what we've seen in the past few days is perfectly in line with other small pullbacks that have happened regularly all the way up. 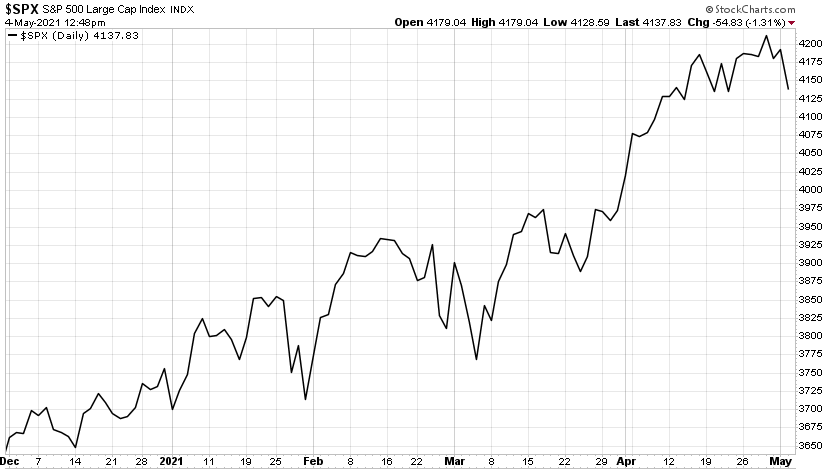 None of the SMI strategies is showing any type of signal to reduce our stock market exposure. Granted, I've been pretty clear about expecting some sort of summer pullback in stocks after the huge run higher we've had over the past year. But it's certainly not clear that we're at the beginning of such a move. It could be, or it could just be another dip such as we've had roughly every 3-4 weeks so far this year.

For those concerned, I'd just reiterate what I wrote to SR investors this weekend — there's nothing wrong with selling a little into market highs. The reason we don't generally recommend that is people tend to get stuck in cash and not get back into the market. But the annual seasonality construct can help with that, even if we're not really fans of it anymore. A person who sells now could make a definite plan to either put that money back to work in stocks at some specific level (say, if the market were to correct -10% from last week's high) or when the annual seasonality calendar turns positive again at the end of October, whichever comes first. That sort of clearly defined trigger to get back invested is key to making sure you don't get permanently stuck on the sidelines and out of the market!

But for most SMI members, our counsel is the same. Ignore annual seasonality and rely on the better tools (like DAA) to manage your exposure to the stock market.

Confused? Ask a question and we'll try to clarify anything that isn't clear. But bottom-line, if you don't have a compelling reason and desire to use annual seasonality, you can safely skip right by it and pretend it doesn't even exist.