A Strategy for Minimizing Your Losses During the Next Bear Market

As an investor, what do you fear the most?

Few things stir our emotions more, financially speaking, than experiencing a historically powerful bear market (such as the one that ran from late 2007 to early 2009). The fear of how long it would last and how deep it would go left “investing scars” on many.

In the aftermath, SMI began new research for a lower-risk investing approach that we hoped would provide a safe harbor for our members during the next market storm. That effort eventually led us to a strategy we named Dynamic Asset Allocation (DAA) and introduced in the January 2013 issue of SMI.

In that introductory article, we showed DAA’s theoretical year-by-year results from 1982 through 2012 using the mechanical rules we had established. The overall results for those 30+ years were excellent, with DAA turning in annualized gains of +13.6% compared to the S&P 500 (a commonly used proxy for the market) averaging +11.1% per year.

However, annual results don’t tell the whole story. They sometimes obscure the heavy emotional impact from weak markets, which don’t lend themselves to neat calendar-year measurements. What would have happened during the specific top-to-bottom periods of uncommon market weakness?

To help answer that question, I looked through the historical record, beginning in 1980 when our research data began, for every market drop of -15% or more (on an end-of-the-month basis). I found seven such selloffs, and three of them were severe with drops in excess of -30%. 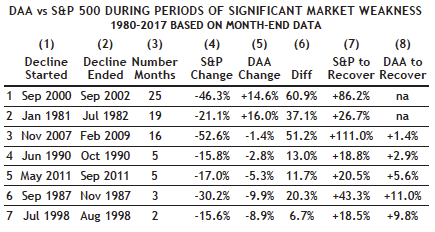 The above table provides the details. The rows are sorted with the longest-lasting period of weakness at the top and the briefest at the bottom. Columns (4) and (5) show the performance of the S&P 500 and DAA respectively for each. Column (6) calculates the difference between the two.

As you can see, in every instance the results from DAA were superior to those of the market. Based on our earlier research, this was expected, but it was good to see DAA’s effectiveness during specific corrections and bear market periods confirmed.

There are other lessons to be learned from this study.

As I say in The Sound Mind Investing Handbook, “Success in investing comes not in hoping for the best, but in knowing how you will handle the worst.” DAA is a strategy in the SMI toolbox designed to help you do exactly that.