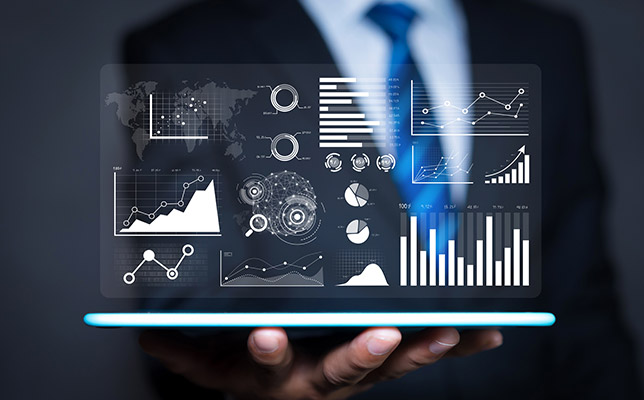 Certain years stand out in American history: 1776, 1865, and 1929, for example. Historians would include others, but there is no doubt that list has grown now that 2020 is behind us. No one will ever forget it, and it likely will get its own chapter in the history books!

Let’s quickly recap the year in markets before covering the SMI strategies. Stocks were at all-time highs in February when COVID burst into public view in the U.S. The resulting bear market was the fastest in history by a wide margin — a stunning -34% drop in less than five weeks. Since bear markets have historically taken an average of 18 months (!) to play out, and a global economic shutdown was just beginning, many feared a prolonged bear market was likely.

Of course, that’s not how the story unfolded. Central banks and governments around the globe flooded their economies with stimulus in an effort to offset the economic shutdowns. In the U.S., the Federal Reserve pumped as much aid into the economy and markets in just a few weeks as they did in five years after the 2008 financial crisis.

Much to everyone’s surprise, it worked — at least as far as the financial markets were concerned. The rapid rebound in stocks mirrored the unprecedented speed of the downturn. By September, stocks had reclaimed all-time highs and would soar to even more incredible heights following the release of positive vaccine news in November.

As for SMI, the value of our diversified approach was on full display in 2020, helping members realize strong gains for the year, while reducing the emotional strain of the sharpest bear market in history. All of the SMI strategies ended the year at or near all-time highs. Here’s a closer look at how our strategies worked together to help us navigate this wild year.

From April to August, the stock market recovery focused on the relatively small group of “stay at home” technology stocks. These stocks soared while most “real economy” stocks languished. But the complexion of the market rally changed dramatically in the final weeks of 2020, following positive news about COVID-19 vaccines. In November and December, big tech plateaued while smaller stocks caught fire.

Led by their allocations to small-company stocks, Just-the-Basics and Stock Upgrading finished the year strong, with fourth-quarter gains of +19.2% and +19.9%, respectively. Those returns far exceeded those of the large-company dominated Wilshire 5000 (+14.5%) and S&P 500 (+12.2%) indexes.

Turning to 2020’s annual returns, it’s important to note that the table below reports the fully invested returns of JtB and the Wilshire 5000 index. In contrast, Stock Upgrading’s defensive protocols shifted it partially out of stocks from April to July. There’s a surprisingly small gap between the three figures, given that significant difference.

Stock Upgrading’s 2020 return of +18.2% isn’t quite as impressive. But digging deeper, we find that Stock Upgrading’s return was quite close to the widely-followed S&P 500 index (+18.4%), despite Upgrading’s defensive protocols exposing it to substantially less risk at a time when devastating losses were a distinct possibility. If the risks hadn’t been so serious, the Fed wouldn’t have intervened in unprecedented ways to break the market’s downward momentum.

A key to successful investing is avoiding the type of losses that permanently impair your ability to meet your long-term goals. Although the Fed’s massive intervention let stock investors off the hook this time, relying on that is a dangerous game. One doesn’t have to look back very far (2008-09, 2000-02) for examples of much longer and deeper bear markets. In 2020, Stock Upgrading was positioned to protect SMI investors from that type of extended trauma, yet still bounced back and produced competitive returns. 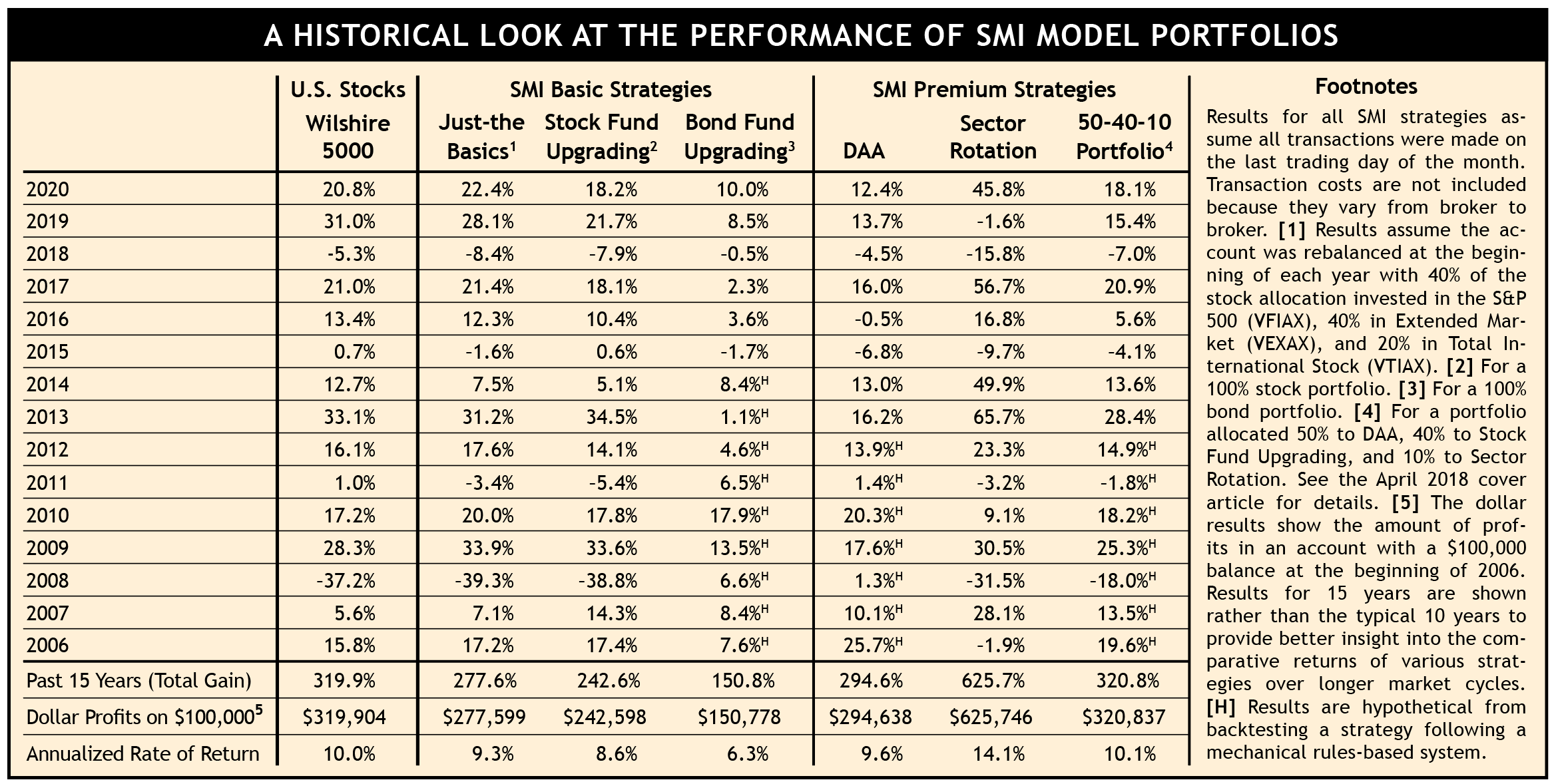 Even though interest rates started the year near historic lows, the Federal Reserve wasted no time cutting them further — to nearly zero — when the market fireworks began. Longer-term interest rates plummeted as well, with the benchmark 10-year Treasury yield falling from 1.88% at the beginning of the year to 0.54% on March 9. Rates stayed low throughout 2020, with the 10-year yield bottoming at an all-time low of 0.52% on August 4. While rates would rise late in the year on vaccine/economic re-opening optimism, even the late-December peak of 0.96% was just half the level at which the 10-year rate started the year.

Allocations to Bond Upgrading play an important role in stabilizing portfolios when stocks are falling. We had a perfect example of that in 2020. Not only did Bond Upgrading produce outstanding absolute and relative returns, gaining +10.0% for the year (while its benchmark index earned just +7.5%), but Bond Upgrading delivered when it was needed most. Nearly all of that return came during the first half of the year, helping offset declines in stocks.

DAA also proved its worth during the bear market. Its changes in the weeks prior to the bear market were nearly ideal, selling Foreign Stocks and Real Estate at the end of January 2020 and shifting into Bonds and Gold. At the end of February, just seven trading days after the stock market set a new all-time high, it sold U.S. Stocks and moved into Cash. By the time markets really crashed in March, DAA was already in its most conservative posture. 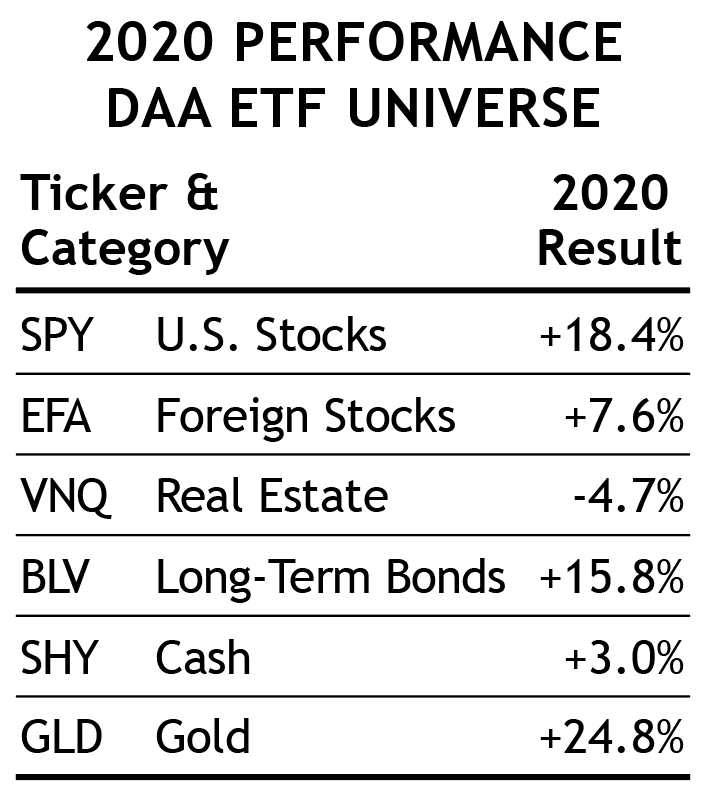 This positioning was an emotional bulwark for SMI investors as they observed one of the most dramatic bear-market plunges in history over the following weeks. With the benefit of hindsight, we know the bear market ended quickly and DAA’s conservative positioning would dampen returns in the months that followed. But DAA provided sweet relief at a time when stock investments were getting hit hard.

The strategy delivered exactly what we needed: maximum safety at the point of greatest market risk. That fostered the emotional stability for SMI investors to stay the course and not make the types of course-altering selling mistakes to which investors are prone during violent bear markets.

Sector Rotation lived up to its reputation as the high-risk, high-reward element of the SMI portfolio in 2020. SR suffered a brutal drawdown (high point to low point) of -49.2% during the bear market. Yet it recovered powerfully to post the largest gain of all the SMI strategies, earning +45.8% for the year, more than doubling the return of the broad market.

The benefits of blending these complementary strategies within a portfolio were clear in 2020. Successful investing requires crafting a plan capable not only of earning solid returns when the markets are rising, but keeping you “in the game” when things are at their worst and the emotional heat feels unbearable. 2020 provided investors with the first serious stress test in a dozen years and an SMI blended portfolio passed with flying colors. Early in the year, our conservative strategies played great defense. Then later in the year, they passed the baton to our more aggressive strategies to play superior offense.

More importantly, the emotional path to those returns was distinctly different. Many investors spent February and March watching their portfolios nosedive without a parachute. SMI investors experienced significantly less stress knowing their DAA holdings were already positioned for the worst-case scenario (and their Stock Upgrading holdings were poised to add further protection should the market continue to fall). Ultimately, Stock Upgrading’s defensive protocols turned into an “opportunity cost” — we could have earned even more if we hadn’t shifted a portion of the portfolio to cash. But the expectation that every piece of our portfolio would respond perfectly to a period that was such an incredible historical outlier isn’t realistic.

SMI’s blended portfolios provided great peace of mind while still posting strong absolute results, despite a dramatic market whipsaw. That’s no small accomplishment, given that SMI uses trend-following strategies. In 2020, the trends went from “up big” to “straight down” to “straight back up” in the span of three months! Rapid, dramatic transitions are unusual and far from ideal for trend-following strategies, so we are quite pleased with the way our overall performance turned out.

While it’s easy to overlook with the benefit of hindsight, if the tremendous intervention by central bankers and governments had not stopped the bear market, this recap likely would be focused on how the SMI strategies saved members from devastating losses, unlike investors who lacked such protection. We’ll never know exactly how that alternate scenario might have unfolded, but we do know our portfolios were well prepared for a prolonged, deeper drop when that risk was the highest it had been in decades. That should be reassuring to SMI investors as they navigate today’s richly-valued, rapidly evolving market environment.