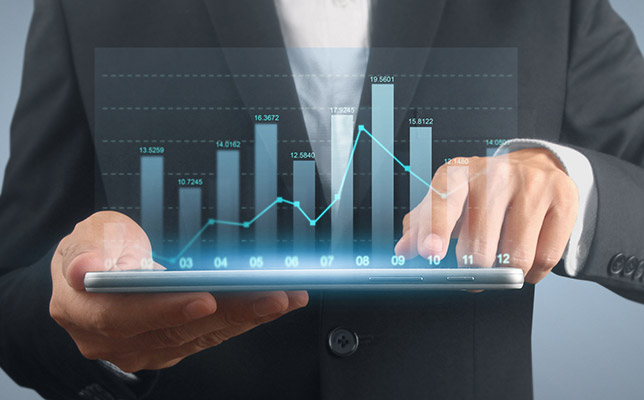 The Federal Reserve Board surprised investors in June with a more “hawkish” (aggressive) outlook regarding the gradual removal (tapering) of their bond-buying stimulus. This news didn’t immediately hurt the broad stock market indexes much — the S&P 500 index was off only -0.7% through the first three weeks of July — but it did cause a significant rotation within the market. Small-company stocks (Russell 2000 index) fell -7.8% by July 19.

Stocks would rally through the rest of July and into August. By September 2, the S&P 500 index was up +5.9% for the quarter, while the Russell 2000 small-company index had climbed all the way back from its July lows to sit at just -0.1% for the quarter.

However, September lived up to its reputation as the toughest month for stocks. By the time September concluded, the S&P 500’s quarterly gain had been whittled down from +5.9% to only +0.6%, while the Russell 2000’s quarterly loss extended to -4.4%. All of the major indexes, including the S&P 500, would dip into official “pullback” status of at least -5% by the time the weakness concluded in early October.

Of course, perspective is everything and the third quarter was the first speed bump for stocks since February-March. Looking back over the prior 12 months from the end of September, the broadest market index (Wilshire 5000) was still up an impressive +32.3% despite being essentially flat over the prior three months.

Given that small-company stocks had a significantly tougher time during the third quarter than the large-company stocks that dominate the broad U.S. market indexes, it’s no surprise that the quarterly returns of SMI’s diversified strategies landed between those of large- and small-company stocks. (Performance updates for all SMI strategies are available each month on the back cover of the print edition of the SMI newsletter, as well as on the Performance tab of the SMI Member homepage.)

Just-the-Basics declined -1.7% for the quarter, reflecting the larger losses of small-company and foreign stocks. However, looking back over the prior year, JtB’s gain was slightly larger than the Wilshire 5000’s (+33.9% vs. 32.3%). So while JtB’s greater diversification hurt over the more recent quarter, it was a net plus over the longer period.

Stock Upgrading was down -2.7% during the third quarter. This portfolio started the quarter heavily overweight small-company stocks relative to the broad indexes. Like JtB, Upgrading’s returns also look more impressive over the prior 12 months, with a gain of +30.0% that was similar to the Wilshire 5000’s gain of +32.3%.

The past 18 months have been an exceptionally unusual time for the economy and markets. While Upgrading has posted strong absolute returns, as the +30% return over the prior 12 months illustrates, it has been difficult to gain any traction relative to the broader market due to the stop-start nature of the economic recovery.

The vaccine announcements last November dramatically reversed the market dynamic of the prior several months. Virtually overnight, the large/growth stocks that dominated throughout 2020 were brushed aside by smaller and value-oriented “re-opening” names. This lasted well into 2021, at which point markets pivoted back to the safety of large/growth stocks as the emergence and spread of the Delta variant cast new doubts on the economic recovery.

It’s highly unusual for the broad economy to alternate between flooring the accelerator and slamming the brakes multiple times in less than 12 months. Such is life in a pandemic. Importantly, while this has laid waste to Upgrading’s best efforts to rotate between growth and value stocks this year, we still think this approach will add value to our long-term returns as the economy returns to a more stable footing and these cycles become more enduring once again.

The initial reaction to the June tapering discussion was for short-term rates to rise while long-term rates fell. The rise in short-term yields was easy enough to understand, as quicker tapering leads to rate hikes arriving sooner than previously thought (even though such hikes may still be many months in the future). The drop in long-term yields was a bit unexpected though. It’s difficult to say whether bond investors were pricing in the idea that quicker Fed action would ultimately necessitate fewer rate hikes, or whether they were reacting to the possibility of the Fed potentially snuffing out future growth.

Either way, the reprieve for longer-term yields ended in early August. The benchmark 10-year Treasury yield rose from 1.19% on August 3 to 1.55% on September 30. As bond investors know, when rates rise, bond prices fall.

While the Bloomberg Barclay’s U.S. Aggregate Bond Index was flat for the quarter, Bond Upgrading fared better, gaining +0.6%. The Upgrading component of this portfolio was invested in short-term TIPS (Treasury inflation-protected securities) throughout the quarter, which benefited from the increasing concern regarding inflation among investors. 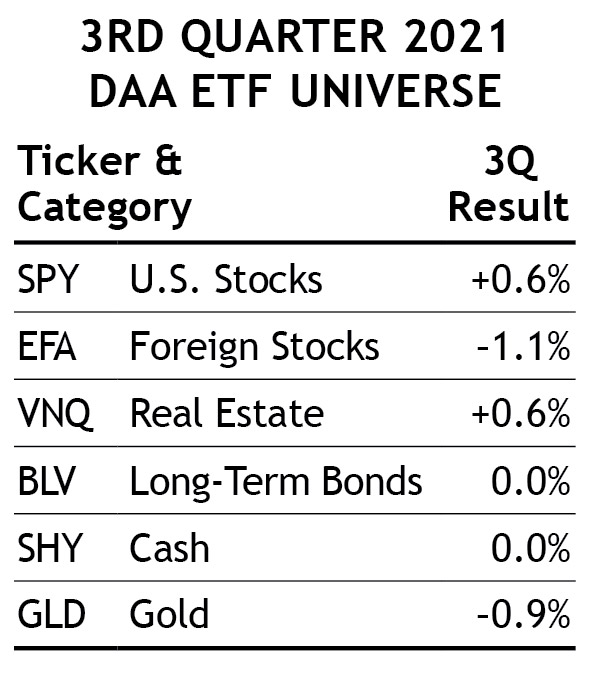 The official DAA portfolio was flat during the third quarter. Returns were a tick lower (-1.1%) if using the optional U.S. stock refinement, which was allocated to small/value stocks. DAA spent the third quarter allocated to U.S. Stocks, Foreign Stocks, and Real Estate. As the small table shows, U.S. Stocks and Real Estate were up slightly, while Foreign Stocks lost ground. Overall it was an unusually quiet quarter across all six of the asset classes DAA tracks.

Unfortunately, that sector pulled back along with the broader market in September after soaring through most of 2021. Thankfully, our Sector Rotation selection has rebounded +11.2% through the first three weeks of October, so there’s hope for a turnaround.

As we’ve seen repeatedly in recent years, the markets can shift suddenly between rewarding risk-taking and punishing it, so a blend of higher-risk and lower-risk strategies can help smooth the long-term path and promote the type of emotional stability that is so important to sustained investing success.

A 50/40/10 portfolio would have dipped a modest -1.9% during the third quarter. While SR struggled, DAA held up well, moderating the path of the blended portfolio. Ultimately this diversified approach landed right in between the returns of the large-company dominated Wilshire 5000 index (+0.1%) and the small-company Russell 2000 index (-4.4%). SMI members who included some Bond Upgrading within their 50/40/10 portfolio fared a bit better this quarter.

Whether you’re using this specific 50/40/10 blend or a different combination, we think most SMI readers can benefit from blending these strategies in some fashion. Such a blend can protect against significant bear markets while also providing the upside potential to take advantage of strong bull markets. That’s a powerful combination.