SMI has increasingly emphasized caution as this year has progressed, with the latest examples being our October cover article on Dynamic Asset Allocation and Matt's Voices of Reason, Reasons for Caution post Monday. Seems as though we must think a bear market is imminent, right?

Not exactly. Truth is, we have very little insight into when the next bear market will arrive. We don't really think anyone else knows the answer to the When? question either.

But there are still three solid reasons why we feel that it's important we emphasize the bearish case, despite the stock market sitting near its all-time highs.

It's our human nature to extrapolate our recent market experience into the indefinite future. When the market has been strong, as it has been the past couple years (and really, most of the last decade), optimism reigns and investors gradually take on more and more risk. In the general investing world, that tends to look like this chart, where the percentage of cash shrinks as investor funnel every available dollar into stocks. 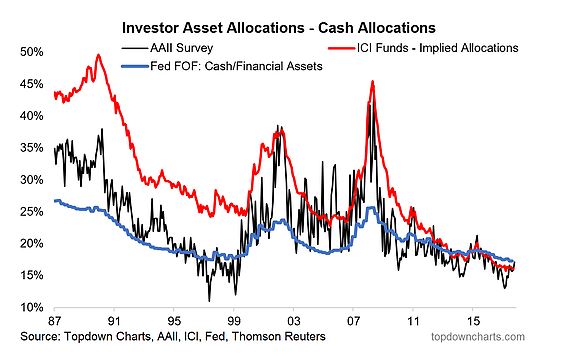 This is a long chart, starting in 1987. Just look at the black line, which is the cash allocation of individual investors over time. The black line surges higher after the crash of 1987 and the big bear markets of 2002 and 2008. Today, the black line is near the historic lows reached only during the late 1990s, and we know how that story ended. Callum Thomas, founder of the research firm Topdown Charts — the creator of this chart — says "it would be without recent historical precedent that cash allocations would drop further than where they are now."

More evidence? The Investment Company Institute shows that at the end of 2016 (the last year for which they had data), those aged 70+ had an average equity allocation in their IRAs of 61.5%. That's up from about 47% in 2008, and not surprisingly, almost exactly what it was in 2007 — right before the Financial Crisis.

If we looked, we could find dozens of these types of examples. The patterns never change, because human nature itself doesn't change. The endless cycle between fear and greed just goes round and round.

In SMI terms, this natural tendency is most commonly expressed through the shifting of assets from defensive strategies (such as DAA and Bond Upgrading), to more aggressive ones (like Stock Upgrading and Sector Rotation).

With our natural impulses tugging in an aggressive direction right now, and gaining daily support from an enthusiastically cheerleading financial media machine, we feel it's SMI's obligation to tug on the other side of the rope. In other words, we're trying to be a counter-balance. We love bull markets as much as anyone, and it wouldn't surprise us one bit if this one lasted at least another six months. But in the context of the two points we're about to discuss, six months or a year is a fairly insignificant length of time. To be blunt, it's time to get prepared now for the next bear market, because it truly could arrive any time now.

2. The brutal math of investing losses

All but the strongest math students among us have a fatal tendency to underestimate the damage of losses to our portfolios. As the chart below shows (hat tip to Lance Roberts of Investing.com), big losses are a lot harder to recover from than one might expect.

Focus on the 2nd and 5th columns and you'll quickly see what I mean. It always requires a larger gain to get back to even than the initial drawdown (loss). And unfortunately, the degree of gain required relative to the initial loss increases dramatically with the size of the loss. So while a 10% loss requires an 11.11% gain to get back even, a 25% loss requires a 33.33% gain to recover. Push that out to a 40% loss (66.67% required gain) or 50% loss (which requires a 100% gain to recover from!), and you can see how significant losses blow big holes in a portfolio that require a lot of future gains to recover from. That typically takes a lot of time, which is valuable to investors who only have a limited amount of it in which to see their portfolios grow.

3. The brutal psychology of market losses

It's not just the math though. It's what happens when those losses hit our fragile human emotions. That's when investor resolve cracks and devastating decisions to sell and stop the pain get made, almost invariably at the very worst possible time.

Ben Carlson, director of institutional asset management at Ritholtz Wealth Management puts it this way: "In a 10% correction, people for the most part are OK. At 20%, people get a little edgy. When you get to the 30%, 40% loss range, people say, 'Get me out. I tap out. That’s it.'"

SMI's experience in 2008-09 confirms that. That was an eye-opener for us, as SMI had weathered the 2000-2002 bear market well enough that most readers never hit their breaking point. But we saw the psychological toll of those bigger losses in 2008-09 and realized we needed to do more to manage that side of the investing coin for SMI readers. After all, it doesn't matter how well our model portfolios bounce back if people aren't still in them to participate in that rebound.

As a side note, that's our #1 concern with indexed portfolios at this point. Indexing proponents make their case based on long-term results. But our experience (corroborated by a wealth of industry research) indicates that many investors don't get those long-term results because they can't stay invested during the big market downturns.

Given this significant insight during the last bear market, SMI has gone to work on ways to manage the emotional journey for readers. The introduction of DAA in 2013 and the "2.0" revision of Stock Upgrading at the beginning of this year are steps that we think are going to make a huge difference for readers when the next bear market arrives. The goal isn't to eliminate all losses — we'd have to give up too much upside to accomplish that. But if we can keep most reader losses in the range where they can handle it emotionally, their portfolios will be in great shape to rebound with the subsequent bull market.

To wrap this up, let me reiterate that we don't necessarily think a bear market is imminent. But given the current market dynamics, it's certainly plausible that a bear could start at any time. At this point in the cycle, it's imperative to be prepared by having a portfolio mix you can live with through the next downturn.