The financial markets were robust across the board during the second quarter, as stocks and bonds alike responded to the “Goldilocks” combination of economic growth being “not too hot and not too cold, but just right.”

Foreign markets were the strongest performers, while at home the tech-heavy Nasdaq gave back a bit of its strong quarterly gain with a June swoon. But by and large, investors had a relaxing and profitable quarter.

SMI’s strategies were solid participants in the quarter’s uptrend, with Just-the-Basics (JtB), Stock Upgrading and our 50-40-10 portfolio all beating the market, Dynamic Asset Allocation (DAA) roughly matching it, and only Sector Rotation — surprisingly — lagging among our equity-oriented strategies.

It’s always fun watching our portfolio balances move steadily higher. The second quarter provided new all-time highs for our JtB, Stock Upgrading, Sector Rotation, and 50-40-10 portfolios, while coming within 2% of a new all-time high in DAA. But it’s worth noting that the stock market’s sprint higher over the past year has been highly unusual from the standpoint that there have been no substantial pullbacks or corrections along the way.

In fact, the last stock market drop of at least 5% came more than a year ago in June 2016 following the Brexit vote. This is just the sixth time since 1950 that more than a year has passed without at least a 5% pull-back for the S&P 500 index. According to Ryan Detrick, senior market strategist at LPL Financial, the average intra-year correction for the S&P 500 since 1950 has been 13.6%, while 91% of all years have had at least a 5% correction. In fact, more than half of all years — nearly 54% — featured a correction of 10% or more. So the market is clearly due to pause at some point.

JtB and Stock Upgrading continued to get a boost from their foreign stock holdings in the second quarter. Foreign markets remained the top performers, while domestic stock returns were largely split along growth/value lines (rather than large/small), with growth stocks firmly in control.

Just-the-Basics rode its foreign holdings to a +3.5% gain for the quarter, finishing solidly ahead of the U.S. Market’s gain of +2.9% (as measured by the Wilshire 5000, the broadest U.S. market index). Stock Upgrading was right on JtB’s heels with a +3.4% gain, driven by solid gains in the Foreign, Small/Growth and Large/Growth risk categories.

June brought about the third rate hike by the Federal Reserve since December, and the fourth overall since this tightening cycle began 18 months ago. It’s interesting that while these hikes always have a direct impact on the short-term end of the interest rate spectrum, their impact on the longer-term end of the rate curve has been quite muted. In fact, while the Fed Funds rate has increased 1% since this cycle began in December 2015, the 10-year Treasury yield is back where it started at 2.31% (vs. 2.28% in Dec 2015).

With short-term yields rising, and longer-term rates rising rapidly post-election only to fall back, it’s been a challenging environment for fixed-income investors. SMI’s Bond Upgrading strategy gained +1.0% in the second quarter, less than the +1.4% gain of the Barclay’s U.S. Aggregate Bond Index, which led to a change in our Bond Upgrading holding last month. That said, Bond Upgrading ended June with a gain of +0.3% over the past year, which was clearly better than the -0.5% loss turned in by the Barclay’s index over the same period. While higher short-term rates and a gradual return toward more historically “normal” interest-rate conditions are long-term positives for savers and bond investors in the future, yields remain low and bond returns are likely to be muted for some time. 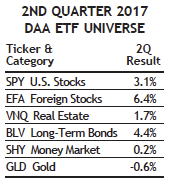 DAA posted another solid quarter, with a +2.8% gain that barely trailed the stock market’s gain of +2.9%. Earning that type of return with only two-thirds of its portfolio invested in stocks was an impressive feat. When the stock market is rising strongly, we normally expect DAA to lag. But as the table shows, the strong performance of foreign stocks helped considerably this quarter.

Participating in the market’s upside to the extent DAA has so far in 2017 is great. Being insulated against the potential of a major market drop at this point in the stock-market cycle is even better. It’s always difficult to imagine the fun will ever stop when stocks have been steadily climbing the market escalator for so long. But we know markets are cyclical and bear markets follow bulls eventually. The strong gains of recent years don’t make stocks less risky; as valuations get stretched stocks actually become more vulnerable to future declines.

Hindsight reveals that the best times to have added DAA to a portfolio would have been at the end of past strong-market rallies, immediately prior to big bear markets. In other words, times like late-1999 and 2007. But those were exactly the times when DAA’s recent returns would have looked the worst relative to the market’s outstanding then-recent returns. That’s the paradox of investing in DAA: you need it most when its recent performance is the least compelling. The current market draws more comparisons to 1999 and 2007 by the day, so be sure you aren’t abandoning this important defensive strategy just as it’s about to be needed most.

Surprisingly, SR was the only SMI equity strategy that lagged the market by any distance this quarter. SR performed quite well in April and May, but ran into a brief correction in June. That caused SR’s return for the quarter to drop to +1.9%. It’s hard to be too disappointed by that though, given that (1) SR was still up +21.0% over the prior 12 months, and (2) SR quickly rebounded to gain +7.9% in the first two weeks of July.

SMI’s research on SR goes back more than a quarter-century to 1990. Backtesting from that point to the present reveals that SR would have earned average annualized gains of +23.2% over that 27½-year period. Since SMI launched SR as a live strategy over 13½ years ago, SMI readers investing in SR have earned average annualized returns of +15.3% per year. In that context, the +21.0% gain of the past 12 months, or even the +26.0% average gains SR investors have earned over the past five years, aren’t terribly far outside our historical experience with SR.

We’re unaware of any other strategy that has provided these types of returns. The fact that SR is so easy to understand and implement is icing on the cake. SR pays for the cost of an SMI membership many times over each year. If you’re a Basic Member (or not an SMI member at all), gaining access to this single strategy by purchasing a Premium Membership is a smart move that more than justifies its cost.

This portfolio refers to the specific blend of SMI strategies — 50% DAA, 40% Upgrading, 10% Sector Rotation — detailed in our May 2014 cover article, Higher Returns With Less Risk: The Best Combinations of SMI’s Most Popular Strategies. It’s a great example of the type of diversified portfolio we encourage most SMI readers to consider.

While the markets have been unusually calm so far in 2017, history vividly illustrates the markets can shift suddenly between rewarding risk-taking and punishing it, so a blend of higher-risk and lower-risk strategies can help smooth your long-term path and promote the type of emotional stability that is so important to sustained investing success. (Blending multiple strategies adds complexity. Some members may want to use an automated approach.)

Given the success of the individual component strategies during the second quarter, it’s no surprise that a 50/40/10 portfolio slightly outperformed the broad market, +3.0% to +2.9%. To get that strong a return in this portfolio while also getting the downside risk protection that DAA provides is a great risk/return trade-off that we’d happily sign up for any time during a rising market. Gathering a significant percentage of the market’s gains during rising markets while avoiding the majority of its losses during falling markets is a recipe not just for superior long-term returns, but the type of emotional stability that leads to long-term success as investors.

The performance of the three strategies included in the 50-40-10 portfolio will vary significantly over time, but diversifying among them in this way will smooth an investor’s journey considerably. Whether you’re using this specific 50/40/10 blend or a different allocation combination tailored to your specific risk preferences, we think most SMI readers can benefit from combining these strategies in some fashion.

The Story of Generosity