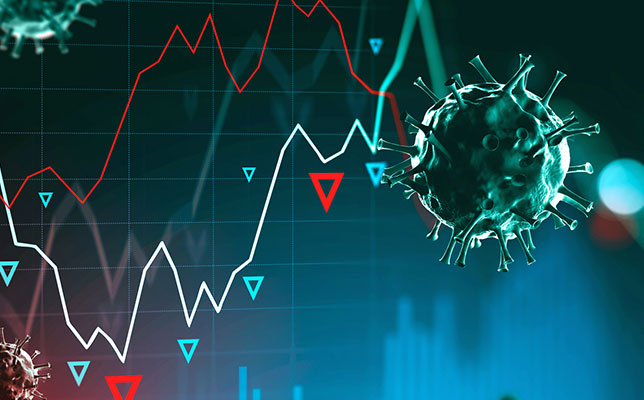 Wikipedia defines “recency bias” as a cognitive bias that favors recent events over historic ones. Investors deal with it constantly — there’s a strong tendency to overweight in our thinking whatever has happened lately. In other words, investors tend to overestimate the importance of what’s just occurred.

That being said, investors can be forgiven for thinking the first half of 2020 has been the craziest period they’ve ever experienced. That’s not just recency bias manifesting itself — by most any measure, it actually has been!

The selling panic that took hold across all financial assets in February, and that played out primarily in March with bear-market lows, left the deck primed for a second-quarter rebound. The massive fiscal and monetary responses from governments and central banks the world over not only put a floor under markets, the flood of liquidity and promises of support sent asset prices spiking in the other direction.

The U.S. stock market, in particular, rebounded off the March lows in spectacular fashion. But stocks were hardly the only beneficiaries. Bonds rallied dramatically as well, as did gold.

Initially, the rebound was simply about the support provided to the markets and the calming of liquidity fears. But by late-May, a new wave of optimism over the re-opening of the economy took hold, producing a second surge in stock prices. Unfortunately, by June 8, signs of a COVID resurgence were growing. That put a temporary end to the stock market rally, and stocks traded roughly -7% lower in late-June.

The first half of 2020 has provided a vivid example of the old axiom, “The economy is not the stock market, and the stock market is not the economy.” The rebound in asset prices had little correlation with real-world economic conditions, which produced some of the most stunningly awful data ever. Unemployment claims, GDP, and a host of other metrics declined by amounts not seen since the Great Depression, except the declines happened much faster this time. What took a few years in the early-1930s was matched in a matter of weeks in 2020.

Given the aggressive rebound in stock prices, investors seem to be betting that the government and central-bank response will be sufficient to “paper over” the huge temporary shortfall in economic activity. The hope has been that the recovery will happen soon enough, and the government’s economic support will be big enough (and last long enough), to warrant looking beyond the current setback to economic activity and employment

That’s a very big bet, and the end of the 2020 economic story remains to be written. But at least during the second quarter, optimism certainly paid off.

In contrast, as a result of having a significant amount of the portfolio in cash during the second quarter, Stock Upgrading’s gain of +14.5% — while still strong — was less than JtB or the market indexes. A quarterly gain of +14.5% is obviously significant, so it’s not as if Upgraders completely missed out on the rally, but they did earn less. That Upgrading earned two-thirds of the Wilshire 5000’s return while having less than two-thirds of its portfolio invested in stocks during most of the quarter speaks well of Upgrading’s risk-adjusted returns. But it was disappointing to have exited stocks, even to a limited degree, just as the market turned and rebounded higher.

Helping ease the potential sting from the stock side of an Upgrading portfolio, Bond Upgrading outperformed significantly during the quarter, earning +4.7% vs. the bond market’s gain of +3.0%.

The bond market was actually the focal point of the Federal Reserve’s bear-market intervention. Not only did the Fed cut interest rates early in 2020, it acted swiftly and forcefully to stabilize the Treasury market in March. Further actions followed in April, with the unprecedented step of the Fed announcing it would buy high-yield (junk) debt broadly through index ETFs, as well as specific investment-grade debt issued by individual companies.

The impact on the bond market was immediate and dramatic. Prices moved higher, and funds such as our new May Bond Upgrading recommendation (which focuses on buying undervalued debt during crises) saw strong gains.

Before moving on from Upgrading, it’s worth noting that a portfolio divided 50-50 between Stock and Bond Upgrading would have ended the first half of 2020 down just -1.1%. In comparison, consider that the Wilshire 5000 index lost -3.3%, while a 50-50 indexed portfolio would have produced a gain of +1.5%.

This comparison shows us two things. First is the value of diversifying a portfolio with bonds! But second, despite Stock Upgrading’s defensive protocols triggering and shifting a significant portion of the portfolio into cash, a blended Upgrading portfolio only underperformed slightly (+1.5% vs. -1.1%).

We’ve mentioned the insurance analogy before, but it’s worth repeating. I don’t consider paying my second quarter home insurance premiums a bad decision simply because my house didn’t burn down. That would be especially true if all the other houses on the street had been on fire at the start of the quarter, a rough analogy to what the stock market looked like in late March!

Ultimately, we paid a small opportunity cost in the second quarter to add significant portfolio protection. In this case, it didn’t end up being helpful. But imagine at the start of the year if you had been told the worst economic and market shock in 90 years was about to unfold. The best-case scenario would be a violent, but short, bear market with a strong recovery. The worst-case was hard to imagine.

Would you have volunteered, in advance, to accept a slightly lower total return (in this example, +1.5% vs. -1.1% = 2.6%) to gain substantial protection against the worst-case scenario? I suspect many, if not most, investors would have considered that a compelling deal. That’s essentially what a blended Upgrading provided SMI members in the first half of 2020. 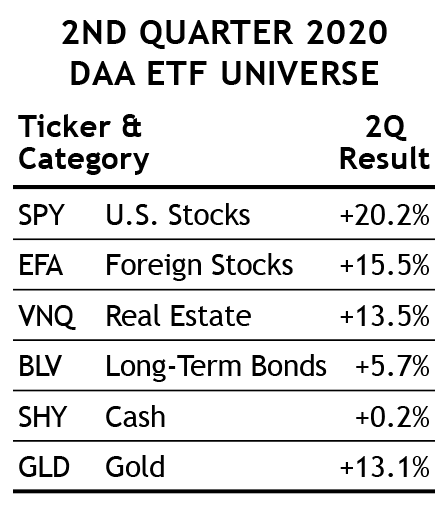 DAA had a great second quarter, gaining +6.9%. Of course, DAA didn’t own any stocks at the beginning of April, so its gains were muted relative to the stock market’s massive rebound. But having posted a first-quarter gain rather than a huge loss, it didn’t need a huge rebound to recover.

For the first half of 2020 as a whole, DAA’s gain of +4.2% compares very favorably to the stock market’s loss of -3.3%. In fact, despite the strong rebound in stocks, it’s worth noting that both DAA (+9.2%) and Bond Upgrading (+10.0%) outperformed the stock market over the 12 months ended June 30. SMI frequently mentions the “cruel math of investing” that requires larger percentage gains to make up for a smaller percentage loss (for example, it takes a +33% gain to recover from a -25% loss). The returns of the past year illustrate this principle quite well, a strong reminder why we allocate to bonds and other asset classes besides stocks.

Long-term Bonds and Gold were outstanding holdings for DAA during the first half of 2020. While the small table shows that Foreign Stocks and Real Estate posted solid gains during the 2nd quarter, those gains were rebounds from losses of -23-24% in the first quarter. In contrast, the smaller but still impressive second-quarter gains for gold and bonds built upon first-quarter gains in those asset classes, making them the strongest performers of the first half by a wide margin.

After posting a phenomenal run of returns for most of the past decade, SR has been a bit off its game the past couple of years. Thankfully, SR got back on track during the second quarter of 2020, earning +22.1%. That was slightly better than the broad stock market, about what we’d expect given SR didn’t own a particularly aggressive fund. With a substantial portion of Upgrading in cash and no stocks in DAA to begin the second quarter, it was important that SR pull its weight as a primary equity holding, and thankfully it did just that.

Over the past year, we’ve seen the rationale for this type of blended portfolio play out. For several months leading up to this year’s bear market, stocks surged while defensive strategies like DAA lagged. Then the tables quickly turned, and as we’ve discussed, bonds and DAA now have the enviable recent performance records.

Part of long-term success as an investor is recognizing that changes in performance leadership are a normal part of the process. The markets regularly shift between rewarding risk-taking and punishing it, so a blend of higher-risk and lower-risk strategies helps smooth the long-term path and promotes the type of emotional stability that breeds sustained investing success.

A 50/40/10 portfolio gained +10.9% during the second quarter, but like DAA, it didn’t have to dig out of as large a hole from the first quarter. For the first half of 2020, a 50/40/10 portfolio posted a small loss, but was still ahead of the broad stock market. (And that’s without including any bonds in the Upgrading portion.) That’s not surprising, as we believe that over full market cycles (bull and bear market), the performance of a 50/40/10 portfolio stands a good chance of beating the broad market—while also protecting investors during bear markets when they are most prone to making costly mistakes. Whether you use this specific 50/40/10 strategy mix or a different combination, most SMI readers can benefit from blending these strategies in some fashion.