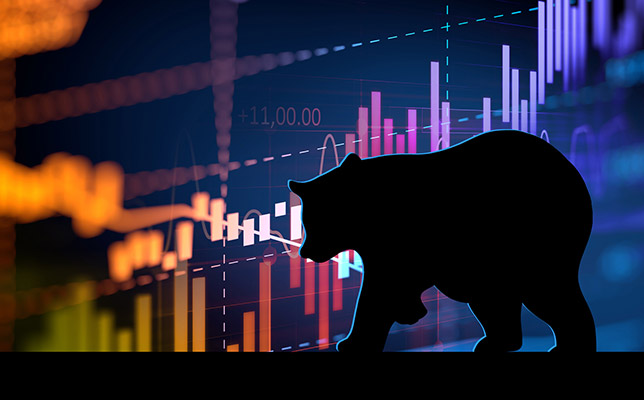 With current market conditions evolving so rapidly, this recap of the first quarter may already feel like ancient history. But there’s value in reviewing what has transpired and the path taken to arrive where we are now.

The big event of the first quarter was clearly the pivot from bull market to bear market in late-February. But it’s important to remember that stocks were establishing new all-time highs as late as February 19. From those highs, as we recounted last month in What We All Need to Know, it took just 16 trading sessions for the S&P 500 to fall -20%, which is the criteria commonly used to mark an official bear market. Historically, new bear markets have averaged eight months to drop the same amount that this market fell in only 16 trading days.

Just seven trading days later, on March 23, the market would hit its low (so far). At its lowest point that day, the market was -35% below its high, set only about a month earlier. This was, by far, the fastest bear-market decline in history. There have been other portions of past bear markets where stocks have fallen at a comparable rate, but never right out of the gate from an all-time high.

If the severity of the market decline was jarring and disorienting, so too was what followed. Over the next 13 trading days, through April 9, the S&P 500 would recover 50% of the ground it had lost!

Bear market declines of -35%, followed by rebounds that recover half that ground aren’t particularly unusual. What is unusual — and stunning — is to have those types of moves occur within a seven-week time frame. Normally, that type of action takes a year or longer to play out.

So if the market action has felt dramatic and disorienting lately, it has been! Trying to make sense of it, especially against the backdrop of the real-life COVID-19 health crisis, has been difficult, to say the least. It’s at times like these that we rely more than ever on our non-emotional “instrument panel,” as discussed in this month’s Editorial!

Here’s a quick review of how SMI’s mechanical strategies performed during the opening stanza of this bear market.

As is often the case during the initial phase of a bear market, Just-the-Basics and Stock Upgrading fell roughly in line with the broad market. We expect this because it takes some time for our 2.0 defensive protocols to turn on for these strategies.

As we discussed last month, the 2.0 defensive protocols narrowly missed turning on at the end of February. In hindsight, we can see how beneficial it would have been had those triggered then, before March’s losses. But that was just seven days after the stock market had set a new all-time high, which is unrealistically fast for a defensive trend-following system to respond.

We covered the volatility in the bond markets in detail last month in Aren’t Bonds Supposed to Be Safe?. But if the recent market turmoil shows us anything, it’s the value of diversifying a portfolio across multiple asset classes, including bonds. While all types of bonds experienced much greater volatility than usual during the first quarter’s panic selling, they still fulfilled their role, providing much-needed stability to our portfolios. Bond Upgrading gained +2.7% during the first quarter. That’s a little less than the +3.2% of the broader bond market, but our Upgrading bonds also were substantially less risky due to avoiding long-term bonds.

As we’ll discuss next, SMI investors owned plenty of long-term bonds within our DAA allocation, and those rose +6.9% in the first quarter. Those returns helped the broad bond-market returns, but weren’t part of our Bond Upgrading portfolio, which was more focused on safety and portfolio stability.

When stocks were soaring and DAA was lagging in recent years, we drew the analogy of how homeowners willingly pay small insurance premiums to protect against large, infrequent disasters. The stock market hadn’t experienced a significant disaster in 11 years, but we were quickly reminded just how brutal they can be — and how valuable DAA is when they do occur. 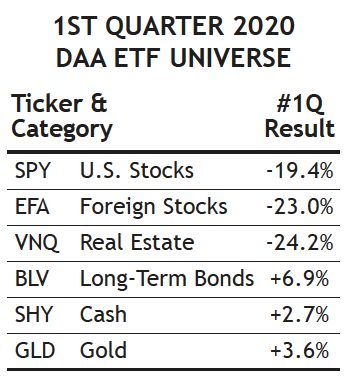 The key to DAA’s success this quarter was that it shifted us out of two risky asset classes at the end of January (Foreign Stocks and Real Estate) in favor of two conservative ones (Bonds and Gold). Those moves allowed two-thirds of our DAA portfolio to completely sidestep the bear market’s stock losses. The remaining one-third of the portfolio, which was in stocks at the beginning of the bear market, quickly shifted to cash at the end of February. So overall, DAA had just one-third of its portfolio exposed to stocks for just the first nine days of the bear market. Beyond that, DAA watched from the relative safety of the sidelines.

Things still got a little tense during the early “liquidation phase” of the bear market, even for DAA. Both bonds and gold sold off on some of the worst days, although both classes recovered quickly. As the table of asset class returns at right shows, there was an enormous gulf between the returns of the three riskier asset classes and the conservative ones during the first quarter, with most of that gap opening up as the worst of the -35% market drop got underway. DAA’s overall loss of only -2.6% during the first quarter of 2020 stands in stark contrast to the market’s -20.7% loss. It’s hard to overstate how important DAA was to SMI members this quarter, both in terms of their portfolio performance as well as their peace of mind.

That DAA performed as well as it did during the quarter’s panic selloff certainly was welcome, but it wasn’t really a surprise. As the chart below shows, DAA has consistently held up during the worst market crises in recent decades. The chart focuses on the worst portions of each crisis, showing how valuable DAA would have been during these periods of acute market panic.

If DAA was the oasis from the market storm, SR was...the opposite of that. At the market peak on February 19, SR was up +14.8% year-to-date. Over the next six weeks, SR would drop as much as -49%, one of its worst stretches ever. Just as it fell faster than the market during that worst stretch, it also bounced back stronger off the lows.

So for the first quarter as a whole, its loss of -25.9% wasn’t dramatically worse than the market’s loss of -20.7%. But the volatility along the way was extreme (which is why we limit how much we allocate to SR!).

SMI members have prospered greatly from SR during the recent bull market: even after including this quarter’s decline, SR remains up +12.9% annualized over the past 10 years (vs. +10.2% for the market). But owning it was definitely a wild ride this quarter. Not surprisingly, the SR recommendation was changed at the end of March to a less-aggressive fund.

This portfolio refers to the specific blend of SMI strategies — 50% DAA, 40% Upgrading, 10% Sector Rotation — discussed in our April 2018 cover article, Higher Returns With Less Risk, Re-Examined. It’s a great example of the type of diversified portfolio we encourage most SMI readers to consider. The first quarter of 2020 was as vivid an illustration as we can imagine of the way the market can shift suddenly between rewarding risk-taking and punishing it. A 50/40/10 portfolio fell -12.3% in the first quarter, considerably better than the market’s -20.7% loss. This is why we believe owning a blend of higher-risk and lower-risk strategies can help smooth your long-term path and promote the type of emotional stability that breeds sustained investing success.

After plummeting to its low on March 23, the market launched an equally dramatic rally higher. Demonstrating again the value of not taking an “all in” or “all out” posture, a 50/40/10 portfolio was able to rise +14.8% over the following 13 trading days (through April 9). That was less than the broad market’s gain of +24.9% over that period, but the portfolio still captured a significant amount of the upside, despite being positioned pretty conservatively. This type of “not too high, not too low” balance was perfectly appropriate as the quarter ended with major questions still surrounding the market’s longer-term trend.

All in all, the first quarter of 2020 provided a good illustration of how balancing return and volatility between the various strategies can produce a smoother ride and solid overall returns. Whether you’re using this specific 50/40/10 blend or a different specific combination, we think most SMI readers can benefit from blending these strategies in some fashion.