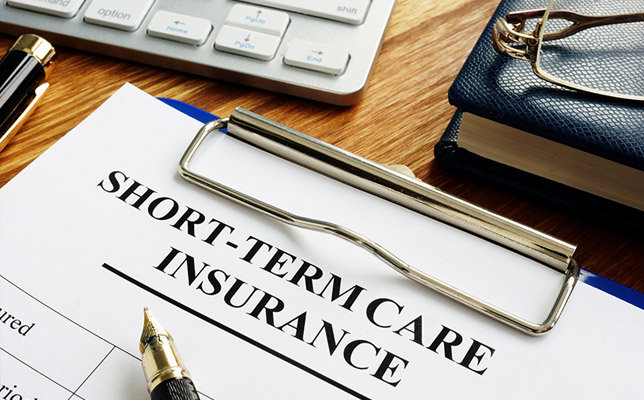 As people move through their 60s, 70s, and 80s, they become increasingly susceptible to illness and injury. In some cases, a medical issue can be debilitating enough to require costly extended care, either at home or in a healthcare facility.

To help aging consumers insure against such a possibility, insurance companies sell “long-term care” policies. Unfortunately, because of rising premiums, such policies are out of reach for many couples and individuals. Further, a significant percentage of seniors can’t qualify for long-term-care insurance because of existing health issues (one-third of applicants in their 60s are rejected, as are nearly half of applicants in their 70s).

The obstacles to purchasing long-term-care coverage have given rise to an alternative: short-term-care insurance (STCi) — coverage that typically provides a benefit of $100 to $300 per day for one year or less. (Short-term-care policies aren’t available in some states, including Florida, New York, and California.)

Because STCi policies furnish coverage for a short, defined period, premiums are more affordable. In addition, the less-stringent underwriting requirements for short-term-care policies mean almost anyone can qualify, even applicants in their 80s. In most cases, the application process doesn’t require a medical exam and typically involves answering only yes-or-no health questions.

Premiums vary depending on the company and policy, but the American Association for Long-Term Care Insurance — which represents the short-term-care industry as well — notes that the typical monthly STCi premium (for an individual) is $105 at age 65. In contrast, a male of the same age with some health issues likely would pay at least $175 a month for a long-term-care policy.
A 65-year-old female with some issues would pay more than $250/month.

That brings up another advantage of STCi policies — one that is especially helpful to single women. Unlike long-term-care policies, which typically charge single women 20% to 40% more than single men, short-term-care insurance is priced the same for both males and females. Women (who tend to live longer than men) don’t pay higher premiums for an STCi policy than men do.

STCi payouts are triggered by the same types of needs covered under long-term-care policies — specifically, when a person needs assistance with at least two activities of daily living (ADLs): eating, bathing, dressing, transferring to or from a bed or chair, or using the toilet. A need for incontinence care also qualifies, as does a cognitive impairment such as Alzheimer’s disease or dementia.

Besides lower costs and more lenient underwriting standards, another thing that sets short-term-care policies apart from their long-term counterparts is that STCi payouts typically begin immediately when needed. Most long-term-care policies have at least a 90-day “elimination period” before benefits start. 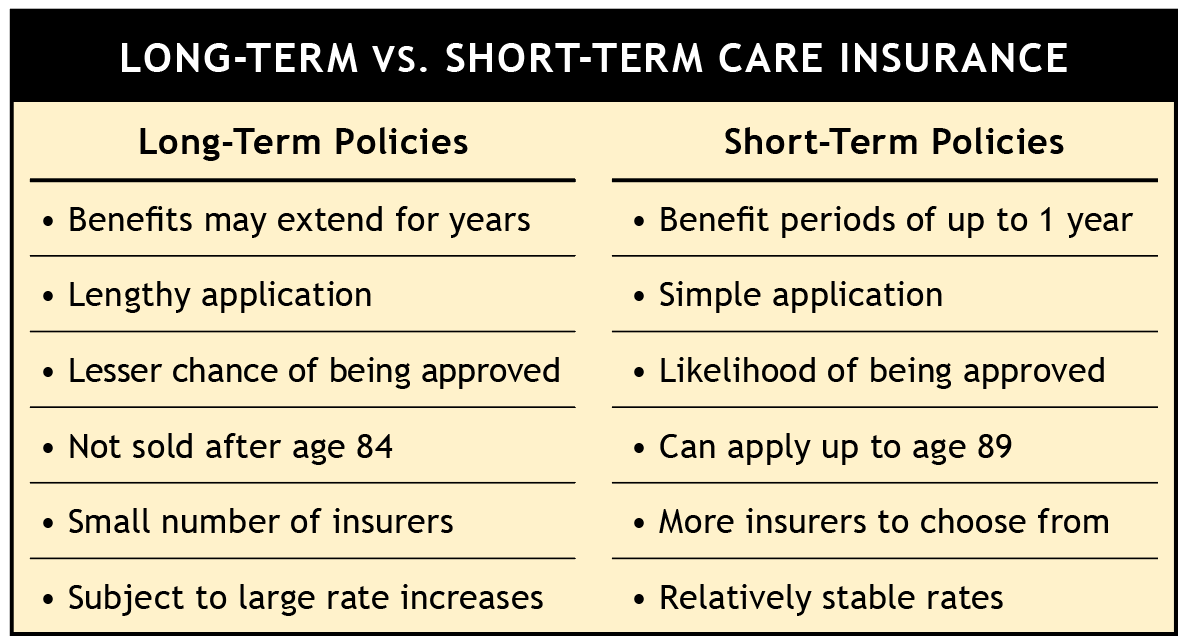 Some short-term-care plans allow the policyholder to “carry forward” unused benefits. If a claim is made but the patient recovers before reaching the end of the policy’s benefit period, unused benefits can be used for a future claim. Some STCi policies even reset the starting date, allowing patients who have recovered (and remain in good health for a certain length of time) to start the benefit period over again when a new claim is made.

An example: A 72-year-old woman with an STCi policy falls and breaks her hip. She needs rehabilitation care after surgery. Her 12-month short-term-care policy kicks in, covering in-home care. (Depending on the particulars of her hospital stay and the nature of the rehabilitation needed, Medicare may cover some rehabilitation costs for up to 100 days as well.)

Within four months, she can carry out normal tasks without assistance so the benefits stop. Her unused benefits remain available if she needs them later. And depending on the terms of her policy, the entire 12-month period for benefits may start over if she makes another claim.

Short-term-care insurance is best-suited for:

STCi policies typically are sold by local agents, working with companies such as Aetna, Bankers Fidelity, and Kemper, and Medico.

By Joseph Slife and Matt Bell 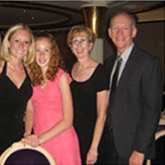