Joseph Slife has been a news writer for the Associated Press, a college instructor, and a radio host.

From 1990 to 2003, he was a writer/researcher for Larry Burkett at Christian Financial Concepts and Crown Financial Ministries, and he served as the executive producer for CFC/Crown Radio from 2000-2005.

He first joined SMI's writing team in 2008, before going on to serve nearly six years as senior producer/co-host for WORLD Radio. He returned to Sound Mind Investing in 2017.

Joseph and his wife Joye have three grown sons.

Roundup: A Sign of an Overvalued Market, The “Non-Financials” of Retirement, and More

Your comments are welcome!

A Thanksgiving Reflection: ‘Therefore I Will Hope in Him’

Of the 195 nations of the world, only a relative handful observe a day set aside annually for giving thanks, including the U.S., Canada, Germany, Liberia, and South Korea.

The U.S. observance dates back to the earliest 17th-century settlers. So President George Washington was furthering an existing tradition when he issued the first National Thanksgiving Proclamation declaring November 26, 1789, as a day of public thanksgiving and prayer:

Your 10 Most Important Financial Moves for 2022 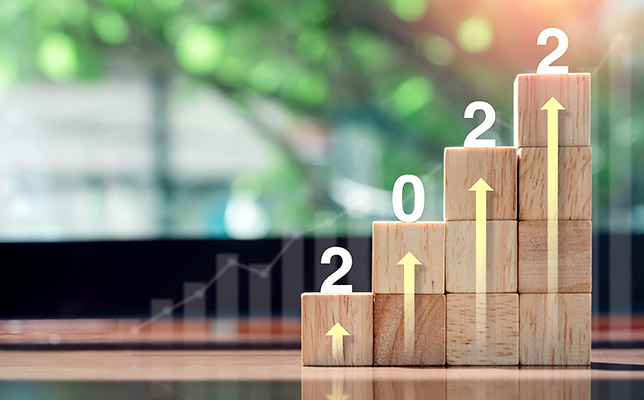 What’s your plan for strengthening your finances in the new year? What goals do you have for your giving? How will you improve your spiritual disciplines?

SMI’s annual Top 10 approach will help you select your most important stewardship-related “action items” for 2022. As you consider your choices, remember your heavenly Father stands ready to help! “If any of you lacks wisdom, you should ask God, who gives generously to all without finding fault, and it will be given to you” (James 1:5).

Medicare Premiums and Deductibles to Rise Sharply in 2022

Most people using traditional Medicare have their Part B premiums deducted directly from their Social Security. So a premium increase has a direct impact on a retiree's monthly SS benefit.

In addition to the Part B premium increase, the Part B deductible will be going up too. Here are the 2022 dollar amounts, announced in a news release from the Centers for Medicare & Medicaid Services (CMS):

The Part B surcharge

The Part B premium noted above — $170.10 for 2022 — is what most users of traditional Medicare will pay. But higher-income Medicare recipients will pay more. They face a surcharge known as the Income Related Monthly Adjustment Amount (IRMAA).

The amount of the surcharge is based on one's Modified Adjusted Gross Income from two years earlier. (So 2022 IRMAA thresholds are based on 2020 income.) 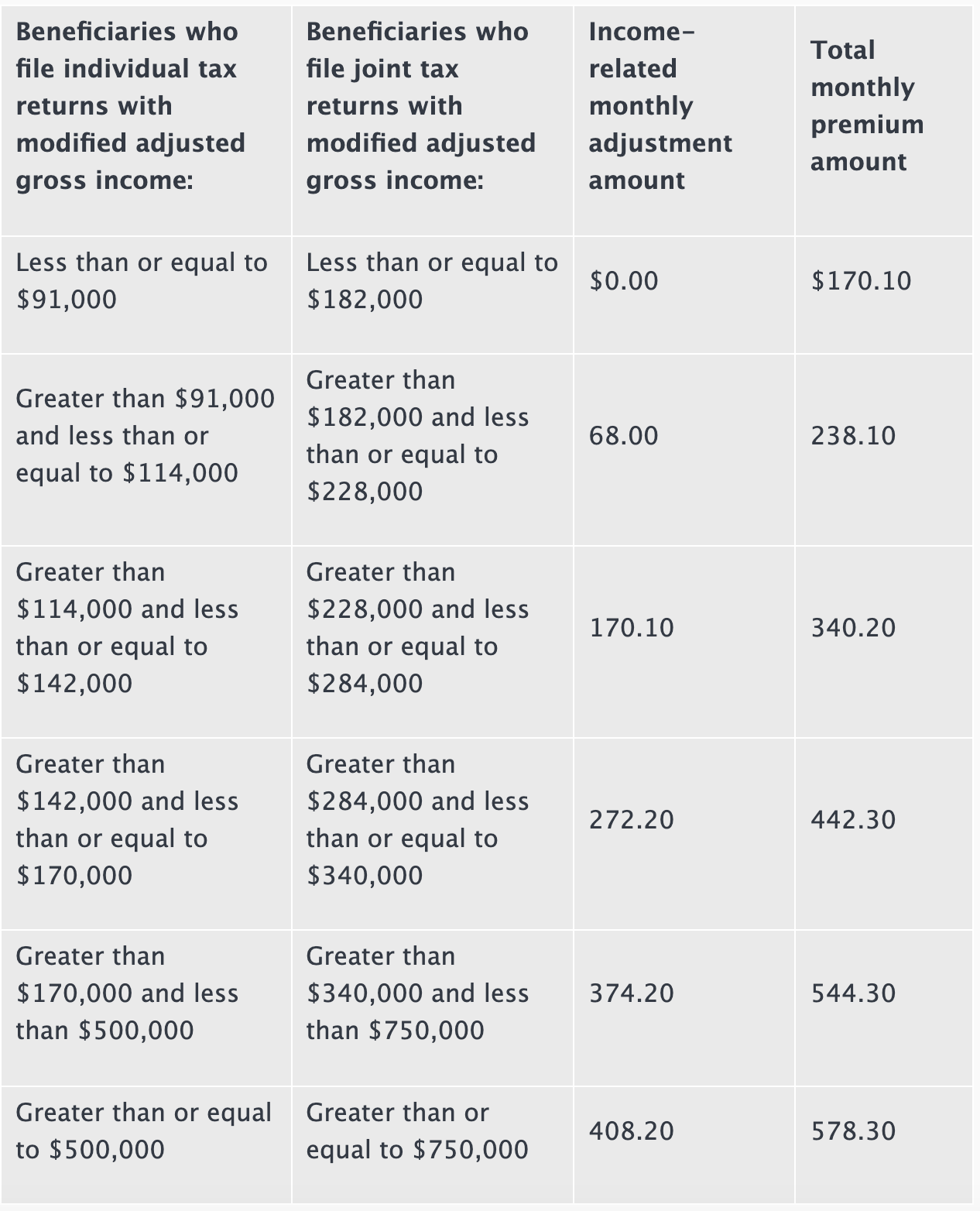 If you're facing an IRRMA surcharge in 2022 but your income is significantly lower than it was in 2020 (the year Medicare is using for reference), you can appeal. Medicare might drop the surcharge.

Some Medicare Part A (hospitalization) costs are going up next year too, as shown in this table: 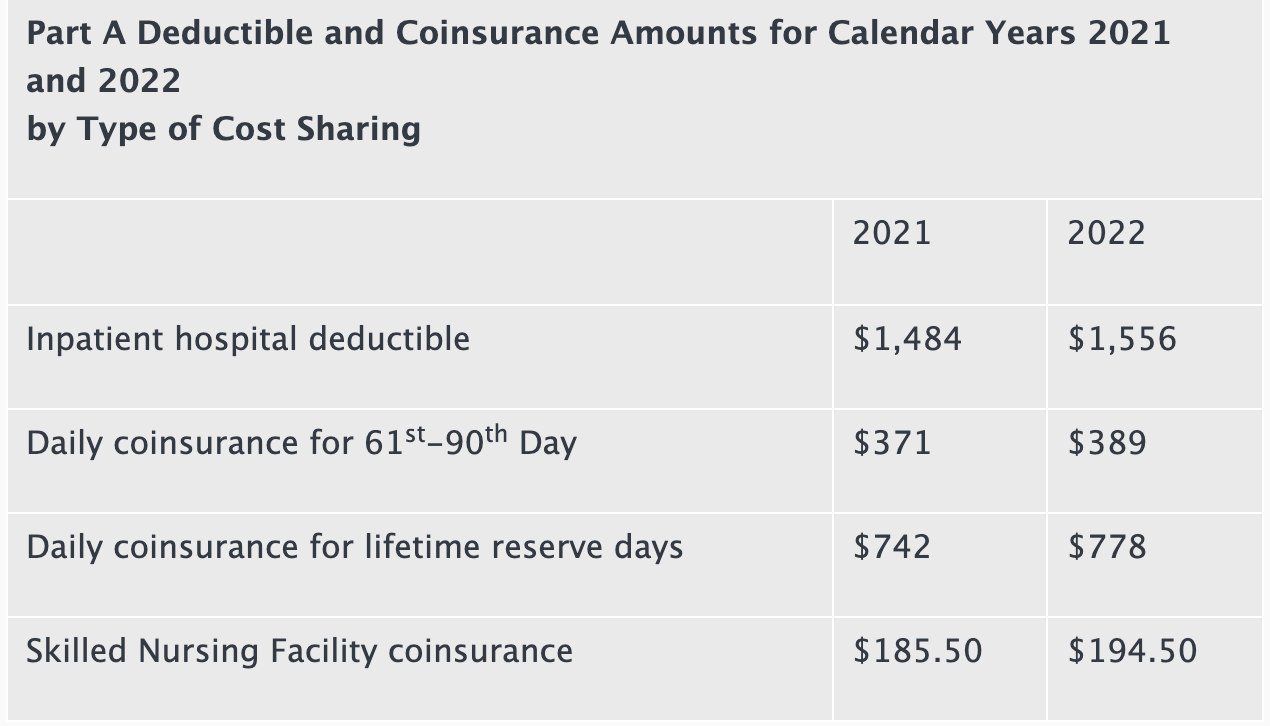 None of this is very cheery, but there is some relatively good news in the data released by the Centers for Medicare & Medicaid Services. The average 2022 premium for Medicare Part D — private health plans that cover prescription drugs — will be up only slightly in 2022: $33.00 per month, compared to $31.47 this year. (Again, higher-income beneficiaries pay more — income-related surcharges apply to Part D premiums too.)

Another bright spot: The average premium for Medicare Advantage plans will be lower next year than this year — $19 per month, compared to $21.22 in 2021. Medicare Advantage is the private-plan alternative to traditional Medicare.

SMI on the Radio: Picking the Best Type of Retirement Account (audio & transcript)

IRAs have certain advantages, 401(k) have others.

On Monday's edition of Moody Radio's MoneyWise Live, SMI's executive editor Mark Biller talked about how to make the "IRA or 401(k)" decision. And he explained why using both types of accounts (if you have that option) may be the best approach.

If you missed the program, you can listen below. Or scroll down for the transcript.

New to the Tracker and FPR? Here's an overview:

• The Tracker: SMI's fund-performance database tracks the monthly returns of thousands of traditional mutual funds and ETFs. The Tracker can filter that large amount of data and produce a concise report covering only the funds available via your employer-sponsored retirement plan, thus making it easier to apply our Fund Upgrading strategy to a 401(k), 403(b), or similar plan.

Important: There are differences between the fund categories used in the Tracker and those used in the SMI newsletter.

The newsletter's Upgrading formula for domestic funds often guides users toward either growth or value funds as appropriate, rather than maintaining both growth and value allocations within each category at all times. Accordingly, the newsletter uses only two domestic categories: Large Company and Small Company.

Tracker portfolios, however, classify holdings according to four domestic stock-fund categories: Large/Growth and Large/Value plus Small/Growth and Small/Value. This helps members who use alternatives to our "official" fund recommendations gauge (using the Tracker's percentile-ranking column) how each fund they own is performing relative to its same-category peers. Because Upgrading calls for selling a fund when it drops below the 25th percentile, having a clear view of a fund's relative performance is important to maintaining that selling discipline.

The Tracker will display any fund that doesn't fit within the five categories mentioned above (Large/Growth, Large/Value, Small/Growth, Small/Value, and Foreign) in a category labeled "Other Funds." 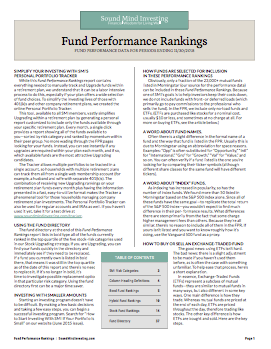 We choose which funds to list in the FPR based on asset size, brand familiarity, and brokerage availability.

Check page 2 to learn how to use the FPR report. Page 3 includes a listing of 70+ risk categories that will help you compare "apples to apples." (Each category shown on page 3 is hyperlinked, enabling you to jump to specific sections within the rankings quickly.) Page 4 of the FPR has explanations of the various data-column headings.

Money Roundup: Slow-Moving Risk, 3 Questions to Ask Before You Retire, and More

Leaves and temperatures are falling. This must be autumn!

As we head into this early November weekend, here's our latest Roundup of interesting articles on investing, personal finance, and stewardship.

Have a comment about any of these articles? "Join the Discussion" below.

One reason Charles Schwab & Co. has been an SMI recommended broker for many years is the company's large fund selection. Schwab offers about 7,500 no-load mutual funds.

At least that was the case until today. The $49.95 purchase-only transaction fee remains in place for most non-NTF funds. But retail investors who buy Vanguard, Dodge & Cox, or investor-class Fidelity funds via Schwab will pay more: $74.95. That's 50% higher than what Schwab charges for online trades of other transaction-fee funds. (This same two-tier transaction-fee structure is also now in effect at TD Ameritrade, which is owned by Schwab.)

They won't pay to play

Schwab says the reason behind the price increase is that those three fund families — Vanguard, Dodge & Cox, and Fidelity — refuse to pay the price Schwab demands to be on its platform.

Schwab provides details about its various compensation models (at some length) on this web page, but here is the information relevant to today's increase:

The transaction fee..., together with the asset-based or per position fees received from the funds, helps compensate Schwab for the shareholder services it provides to customers who own TF Fund shares.

Even though more than 130 of Vanguard's traditional funds are available via Schwab, a Vanguard representative told Barron's that the company "has a long-standing policy of not paying distribution fees that incentivize sales of our funds on third-party platforms." In other words, if investors want to buy Vanguard's traditional funds without paying a fee, they should cut out the middleman and buy directly from Vanguard.

A Dodge & Cox spokesman made the same point: "Individual investors can invest directly with us without paying a transaction fee." Fidelity didn't respond to Barron's request for comment.

For now, Schwab's transaction-fee increase affects only funds offered by Vanguard, Dodge & Cox, and Fidelity. We'll have to wait and see if this transaction-fee "surcharge" model spreads to other funds on the Schwab platform, or whether this is simply a one-off situation. (We should note that for several years now, Fidelity has charged a bigger fee for buying Vanguard and Schwab funds than it does for other transaction-fee funds.)

Retail investors have enjoyed a season of declining fund fees (of various types) for several years now. Let's hope this latest move by Schwab isn't the start of a trend reversal.

For SMI investors who invest with Schwab (or TDA), the impact of this latest pricing change should be minimal. One reason is that Schwab's new pricing policy leaves ETF trades unaffected. Exchange-traded funds — including Vanguard and Fidelity ETFs — will continue to trade free via the Schwab/TDA platforms. So you may be able to use comparable ETFs instead of traditional mutual funds.

It is also worth noting that Schwab's $49.95/74.95 fee isn't applied in all cases, according to the company's pricing guide. Schwab waives any transaction fees for trades that are less than $100. So, for example, if you were dollar-cost-averaging $75 a month into a transaction-fee fund at Schwab, you wouldn't pay a transaction cost.

Further, Schwab's transaction fees have a sliding scale. "[T]ransaction fees do not exceed 8.5% of principal," the company says on its website. To give an example, a $500 purchase of a transaction-fee fund would incur a transaction cost of $42.50, not the full fee of $49.95 charged for most funds or the $74.95 fee charged for Vanguard/Fidelity/Dodge & Cox funds. 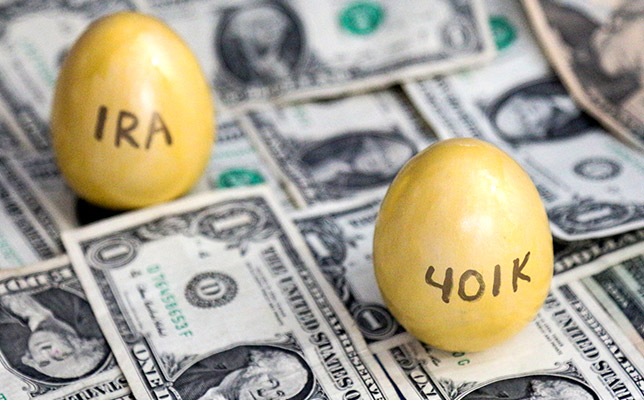 This article has been updated to reflect 2022 contribution and deductibility limits.

The two main types of retirement vehicles in the U.S. are Individual Retirement Accounts (IRAs) and employer-sponsored accounts, such as 401(k)s. These are similar in many respects, and both offer tax advantages. But if you’re eligible to contribute to either type of account, should you choose one over the other? It depends on your situation.

Save Big This Christmas! (By Not Giving In to the Marketing Hype) 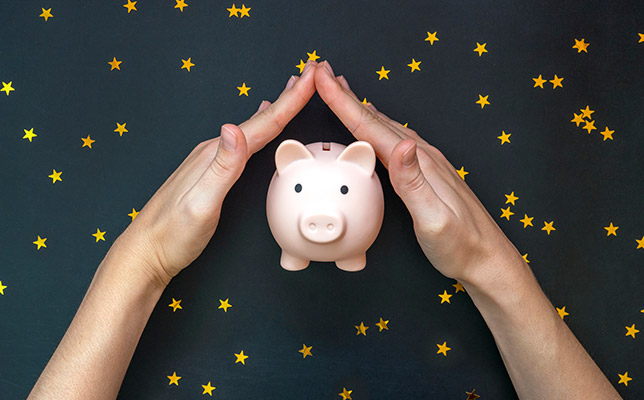 Many retailers generate about a fourth of their annual revenues during the period between Thanksgiving to Christmas. No wonder they pull out all the promotional stops during that time, including their most most-hyped shopping events (Black Friday and Cyber Monday) and their most aggressive buy-now-pay-later pitches.

Sure, you can find some good deals, but be careful. Don’t be manipulated into buying things you don’t need or making purchases that will blow a hole in your budget. These guidelines will help you resist this year’s marketing push and spend your dollars wisely.

The Heart of the Matter

SMI For Those Living in Retirement

Trusting God to Work Things Together for Good